The first post-lockdown survey by Irish Business Against Litter shows Cork City Centre has dropped to ‘littered’, alongside Mahon and Cork Northside. Fermoy again was ‘Clean’ and in 7th position in the ranking of 40 areas nationwide.. Although the majority of our towns have cleaned up over the past 12 months, litter in our main cities has worsened to levels not seen in ten years. Portlaoise emerged as cleanest town. The study found no fall-off in PPE litter across the country.

The An Taisce report for Fermoy stated:

Fermoy has again delivered the first-class showing we have come to expect. Based on the window display at ‘Munster House’ (Patrick Street), there is clearly a very strong emphasis on litter and the environment, where many awards and campaigns have been displayed. There was plenty of new ‘Keep Fermoy Tidy’ signage throughout the town and the facility for the disposal of compostable cups is a great one. Top-ranking sites included the River Walk, Patrick Street, all the approach roads and Fermoy Town Park – the latter was particularly clean and tidily maintained. It is one of the few places which actually acknowledges that cigarette butts and dog fouling are litter. By far the most heavily littered site was a miscellaneous site along R639 – it is across the road from the IDA site and car dealership – as well as the casual discarding of food related litter, miscellaneous items were building up over the low wall.

The An Taisce report for Cork City Centre stated:

Cork City has been a strong performer for a number of years but there was a definite slide in the performance this time around. Many of the poorer ranking sites in 2020 have failed to show any or much improvement e.g., Commons Road / Lower John Street / St. Patrick’s Quay and Derelict site – Carmelite Place, Western Road. With so many seriously littered / neglected sites, it does impact on Cork’s overall ranking. Experience shows that heavily littered / neglected sites tend to attract more litter and abuse. Top ranking sites included Harley’s Street (brought to life by attractive paving, colourful wall painting, abundant planting and outdoor dining), Princes Street (where a ‘one-way’ pedestrianisation is operating and wall painting brought the narrow street to life), Kennedy Park (a lovely park environment which wasn’t just good with regard to litter but presented very well), St Patrick’s Street (excellent streetscape) and Recycle Facility at Wilton Shopping Centre (a very freshly presented and maintained facility).

The An Taisce report for Mahon stated:

There has been little change in Mahon since the previous survey. It was great to see the community initiative at Walkway next to Estuary on Jacob’s Island. A change for the better was noted at Car Park at Lakelands – while still poorly presented there were no visible litter issues of note. Ave de Rennes has improved in terms of general presentation, and this appears to be reflected in a somewhat improved litter situation. Mahon continues to suffer from a number of heavily littered sites. By far the most heavily littered was the pedestrian link from Ringmahon Road to Aldi – it would seem that only superficial cleaning is taking place as there were heavy accumulations of alcohol related litter at the base of the shrubbery.

The An Taisce report for Cork Northside stated:

Overall, Cork Northside has failed to improve on past IBAL surveys. There is some evidence of what looks like ‘community clean up’ activity and green areas are being managed. The cutting of vegetation along roadways revealed a lot of ‘chopped up’ long-lie litter. Time and time again, plastic bottles were observed at many of the littered sites. Some deterioration was noted at Old Mallow Road and Popham’s Road. Many of the poorer ranking sites weren’t just casually littered but dumping had taken place e.g. Red Forge Road, Old Mallow Road, Dublin Hill, Sunvalley Drive and particularly at Ballyvolane Road and Churchfield Avenue (including the industrial area). 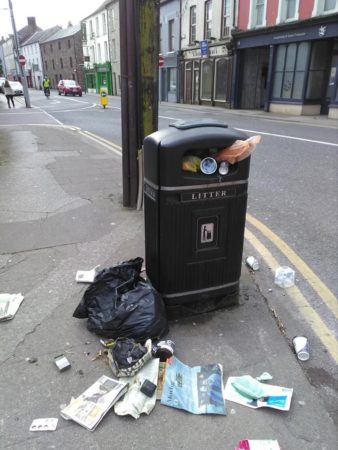 The number of areas deemed clean by An Taisce, who carry out the survey on behalf of IBAL, rose from 17 to 23. In all, 68% of towns showed an improvement on last year. Portlaoise, which was at the very foot of the table back in 2010, topped the rankings, ahead of Leixlip and past winner Ennis.

IBAL’s Conor Horgan commented: “With local authority cleaning schedules normalising again and volunteer groups re-engaged in clean-ups across the country, our towns are almost as clean as 2 years ago. This is still some way short of where they were in 2014, however.”

By contrast, the majority of urban areas fared worse than in 2020, among them Dublin, Cork and Limerick City Centres, which were all deemed ‘littered’.

A bleak picture for cities

All but one of the bottom 10 places in the rankings were occupied by urban areas. “For cities, this survey paints a bleak picture,” comments Conor Horgan. “Litter levels have worsened to a level we have not seen in the past ten years. Now that we have emerged from lockdown, we cannot use it as an excuse for high levels of litter.

“As we invest in promotional drives and build city hotels in anticipation of more visitors, we need to be mindful of the littered environment we are presenting to them.”

For the first time since 2014, Dublin’s North Inner City was deemed a litter blackspot. Of the 25 sites in the area surveyed, only 2 were found to be clean, and 17 were ‘heavily littered’ or worse.

The study showed a near-30% increase in the prevalence of PPE masks on our streets and an increase in alcohol-related litter such as cans and bottles.

“The need for PPE has not abated – unfortunately we’re still using disposable masks, we’re still dropping them at an alarming rate and they are still not being picked up,“ says Conor Horgan. “We are consuming more outdoors and this is translating into more food- and drink-related litter.” Despite this, the survey showed a 20% drop in coffee cup litter. There was also a steep fall-off in cigarette butts.

IBAL was once again critical of the failure of local authorities to address sites which they have previously highlighted as heavily littered, especially in urban areas. Of the 103 such sites exposed last year, fewer than half have been cleaned up in 2021.