Baltimore RNLI were called out to provide assistance to a windsurfer in difficulty in Baltimore harbour, West Cork yesterday evening (Monday 25 October).

The volunteer lifeboat crew launched their inshore lifeboat at 6.30pm following a request from the Irish Coast Guard who had received a report from members of the public that a windsurfer appeared to be in difficulty in Baltimore harbour.

There were four volunteer crew onboard the lifeboat, Helm Micheal Cottrell and crew members David Ryan, Ian Lynch and James Kitt. Assisting at the boathouse were Jerry and Rianne Smith. Conditions in the harbour during the call were calm with a south westerly force 2 wind and no sea swell.

Speaking following the call out, Kate Callanan, Baltimore RNLI Volunteer Lifeboat Press Officer said: ‘We would like to commend the members of the public who raised the alarm today when they felt the windsurfer was in difficulty. If you see someone who appears to require assistance whilst at sea call 999 or 112 and ask for the Coast Guard.’ 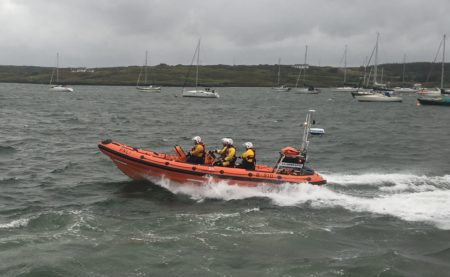 Mahon call centre firm ‘Telus’ is to donate €50,000 to Irish charities
Previous Post
Funding for major trauma centre in Cork must be made available by HSE