IN NEXT 3 YEARS: Aldi will expand into Kanturk, Carrigaline, and Clonakilty

North, South, and West Cork to get new Aldi stores

Aldi will open new stores in Cork including Clonakilty, Kanturk and Carrigaline (on the old pottery site as previously reported on TheCork.ie), as part of a €320 million Irish expansion drive in a bid to further grow its share of the Irish grocery market. The investment drive will see Aldi open 30 new stores across the country, building on the €1.6 billion Aldi has already invested in its 149 Irish store and distribution network. Aldi will increase its investment in Ireland by more than 75% over the next three years compared to 2019-2021.

The new stores will provide additional trading opportunities for the 330 Irish producers Aldi now partners with. Aldi will spend over €1 billion with Irish producers this year, an increase of almost 20% on 2020, including €250 million on Irish food and drink during the busy Christmas trading period. 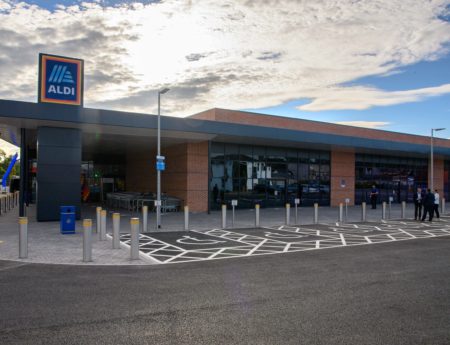 Aldi Store opened in Douglas, Cork during the summer of this year. and are already seeking to extend the premises. Now the German retail giant has confirmed its plans for new stores in Carrigaline, Clonakilty, and Kanturk are on track
Pic Daragh Mc Sweeney/Provision

Commenting, Niall O’Connor, Group Managing Director at Aldi Ireland said: “We’re investing €320 million over the next three years in the opening of 30 new stores, bringing unbeatable prices, value and employment to more towns, villages and city suburbs. This investment builds on the €1.6 billion we have already invested in Ireland and is a clear sign of our ambition, and the demand that exists for Aldi to be in more locations across Ireland. It’s also great news for Irish food and drink producers, who will have more opportunity to trade with Aldi. We will spend over €1 billion with Irish producers this year, an increase of almost 20% on 2020.”

Sustainability is a lead priority for Aldi. Over the past two years Aldi has made huge progress is meeting its targets of halving the volume of plastic packaging it uses by 2025 and ensuring 100% of its own-brand product packaging will be recyclable, reusable, or compostable by the end of next year. 95% of its own-brand products now feature eco-friendly packaging, while 2,150 tonnes of virgin plastic have been removed from its stores and a further 930 tonnes of non-recyclable packaging materials replaced with recyclable alternatives.

Aldi’s existing Cork stores are deeply involved in their local community, having donated over 311,000 meals to local charities to date through Aldi’s partnership with FoodCloud. All of Aldi’s Cork stores are also part of its Community Grants network, with Cork Association for Autism, COPE Foundation and Marymount Hospice some of the many local charities that have availed of the €500 bursary grant in recent years.