The Taoiseach Micheál Martin TD will attend Cork Airport this afternoon (Saturday) in advance of the public re-opening on Monday.

Cork Airport will reopen for flights on Monday 22 November at 2am, following a ten-week closure. 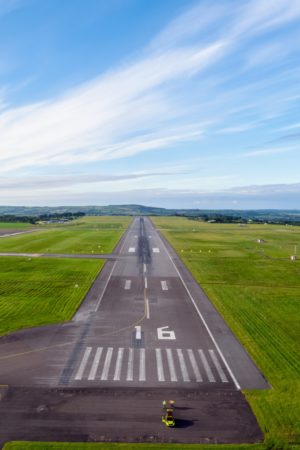 Much like a Motorway, a runway has to be resurfaced from time to time.

Cork Airport’s media communications team, which includes Cobhman Kevin Cullinane – who was promoted from Cork Airport during the works – created a series of videos charting the works over the past few weeks.

Cork Senator Jerry Buttimer said, “The reconstruction of the main runway at Cork Airport is the fastest large-scale State construction project in recent years. From approval of funding to the full completion of the construction works, the entire project took a mere 12 months to complete.

“While we often hear reports of large infrastructure works going over budget or over time, I’m delighted to say this project was completed on schedule, with the works taking place over 10 weeks, and completely within the multi-million euro budget.

“Decisive action was taken to close the airport for ten weeks, which ensured the new runway was delivered in a fraction of the ten month time period it would have required had the airport remained open.

“Over 430 people were employed on the project, which was supported by Government funding of €10m from the Department of Transport with the remaining investment coming from Cork Airport’s parent company, DAA.

“Between 2020 and 2022, DAA is investing a total of over €40m to prepare Cork Airport for significant growth into the new year and beyond.

“This investment will provide a huge boost to businesses across Cork and the entire South of Ireland, as both the aviation and tourism industries recover from lockdowns over the past 20 months that effectively forced both sectors to shut up shop.

“Environmental sustainability is at the heart of all investment projects over the 2020-2022 period in Cork Airport. An electrical upgrade due to take place early next year will reduce the total electrical carbon footprint of the runway by 70%.

“Cork and Munster hospitality and tourism businesses vitally need every opportunity to claw back revenue lost to the lockdowns. The reopening of the airport with a brand-new runway is pivotal in ensuring their doors remain open for months and years to come,” concluded Senator Buttimer.

It follows a re-building of the runway which has had the vital transport hub closed since September 13th. Cork Airport re-constructed its main runway over 10 weeks, along with upgrading of the approach, airfield, and ground lighting, along with the runway edge and centreline lighting plus drainage and ducting systems. The re-opening today is on schedule. This was the biggest investment in Cork Airport since the construction of the new terminal, multi-storey car park, maintenance and other buildings and roads in 2005/06.