McGlade is going into his third season with the club, and he told CorkCityFC.ie that promotion is the target for 2002: “I’m just really happy to get it done. I wanted to stay and push on again next year. Last year didn’t really go as we would have liked, but I think we will be much, much stronger next year. We all want to push on and get this club back to where it needs to be. I definitely want to score a few more goals next season. I usually try to hit double figures, and that will be my aim for next year. I just want to help the team climb the table and get promoted.” 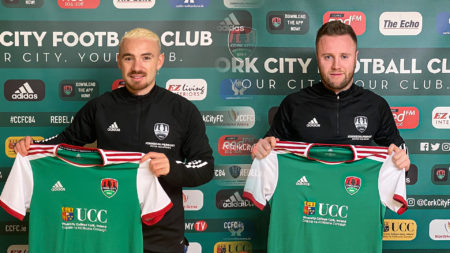 “The last game of the season, with nothing to really play for, and The Cross was absolutely rocking, so hopefully when we come back in February, we can have the place rocking again. It is a massive help to the players on the pitch when the crowd is behind us like that, it really pushes us on. We want to keep the fans coming back and we want to entertain them.”

O’Connor returns to the club having played virtually every game for Shelbourne as they lifted the First Division title, and he says he wants more of the same on Leeside this season. The Wexford native said: “I am delighted to have signed back. I have been chatting to Colin for a while now and he was a major factor in me coming back. Shelbourne had a good side last year that I was part of, and I want more of that next year. Colin is obviously bringing in some experienced players to go along with the talented young players already at the club, so we will be pushing for promotion.”

“If the season had been a few games longer, City could well have got into the play-offs and anything can happen from there. It was a slow start but, once they got going, they improved over the course of the season. I think Colin has things going really well here, you can see what the club is building and I want to be part of that. When Cork City come calling, you always want to come back and be a part of this club. I want this club to be challenging for trophies and hopefully that is what we will be doing.”

City boss Colin Healy welcomed the news of the latest additions to his squad, saying: “Dylan had a good year last year. We are always wanting more from him, I am always demanding more from him. He has a lot of talent and we hope he will have a big year next year.”

“I have played alongside Kev and also managed him for a short spell, where he did really well for me. The minute I spoke to him about coming back, he was delighted to be coming back. He’s a very good player, he has experience, he knows what the club is about and he knows what I’m about. He played regularly in this division last season and has that experience of getting over the line, so it is another good addition to the squad.”