The Mayor of the County of Cork recently cut the ribbon on three new developments in Crosshaven. The Mayor -Cllr. Gillian Coughlan – officially opened a tourist kiosk, the redeveloped Point Garden, and unveiled a new sculpture at a special event on Tuesday, December 21st.

The new custom-built Tourist Information Office is located in the public car park on Lower Road overlooking the water. It replaces the portacabin that was started by local man Denis Collins in 1994 and was in operation for 25 years. Planning permission was granted in 2016 and Cork County Council provided the majority of the funding for the project.

Crosshaven Development Committee fundraised and commissioned local sculptor Mike Wilkins to design an iconic piece for the village. His creation, which features two fishermen holding a full net above a boat, is located on the Greenway on the approach to Crosshaven. Additional funding was provided through the Council’s Village Enhancement Scheme.

Cork County Council carried out significant public realm improvement works at the Point Garden to make it more accessible adding new seating, picnic benches and improving the landscaping. The garden was first started by a group of locals 30 years ago who protected the area from storms and installed seating. 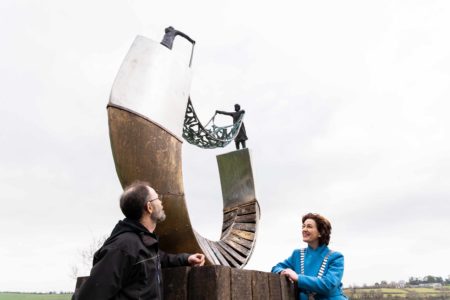 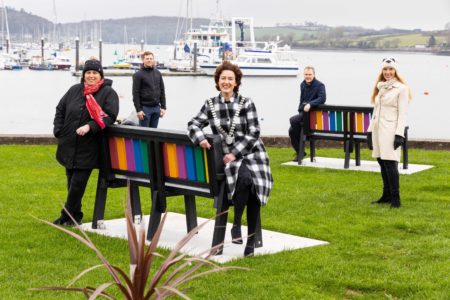 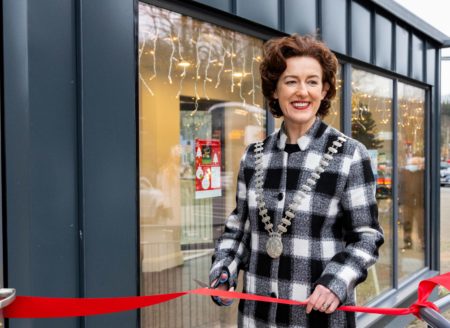 Mayor of The County of Cork, Cllr Gillian Coughlan, pictured at the official opening of the new Tourist Information Kiosk in Crosshaven, County Cork. The Kiosk, funded mainly by Cork County Council through various grant schemes, replaces a portacabin which functioned as an information kiosk for over 25 years.

Mayor Coughlan said it was a pleasure to cut the ribbon on three fantastic developments,

“These projects were the brainchild of the local community, and Cork County Council was delighted to provide funding and assistance in bringing them to fruition. They are sure to energise the community and to attract more visitors to Crosshaven. The public realm works carried out at the Point Garden have enhanced and transformed the area. The sculpture reflects the sea faring aspect of the village and will become an iconic landmark. The Tourist Kiosk is a modern and attractive building that will provide information and friendly assistance to all visitors. I know that it will become a focal point and will encourage visitors to explore everything that is on offer nearby.”

“Crosshaven was allocated €68,000 under the Village Enhancement Scheme at the end of last year. The scheme provides support for rural settlements and to improve the infrastructure, aesthetics and facilities in villages across the County of Cork. It is great to see the improvements that have been made in Crosshaven as a result of this and other funding. We want our towns and villages to be hubs of economic and social activity and Crosshaven is a wonderful example of what can be achieved with everyone working together.”

AREA: SOUTH CORK, ENTERTAINMENT, NEWS
House prices rose by 6% – 8% in Cork in 12 months
Previous Post
Where to have your ‘Peace Commissioner’ type document signed in Cork?