BABY NAMES 2021: Fiadh was the most popular girls name in Ireland

See the data yourself at https://www.cso.ie/en/interactivezone/visualisationtools/babynamesofireland/

The Central Statistics Office (CSO) has today released statistics on Irish Babies’ Names 2021. Commenting on the trends in Irish baby names, Gerard Doolan, Statistician, said “Jack has retained the top spot as the most popular baby boys’ name in 2021, a position it has held since 2007 except for 2016, when James was the most popular choice. Jack was followed by Noah, James, Conor and Rían as the five most popular names for boys in 2021.

Fiadh is pronounced as “Fee Ahh” and it means “deer”, “wildness” or “respect”.

Fiadh has improved her ranking every year since 2009 when it was the 488th most popular girls name. In recent years, Fiadh has continued to increase in popularity, ranking 3rd in 2019, to 2nd in 2020 before now taking the top ranking in 2021. As is evident from the tables, over the years, girls are given a wider variety of names than boys with 4,741 girls’ names registered in 2021 compared to 3,863 boys’ names.

A regional breakdown of the most popular boys’ and girls’ names is available in the publication.”

The Central Statistics Office (CSO) has published babies’ forenames since 1998 and it receives this data from the General Registration Office (GRO). 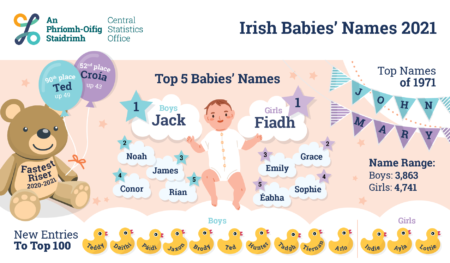