Every aspect of the Honan Chapel has been lovingly restored

The iconic and much-loved Collegiate Chapel of Saint Finbarr (Roman Catholic) – better known as the Honan Chapel at University College Cork – will today unveil the result of its €1.2m refurbishment works at a special Mass to mark a new chapter in its 106-year-old story.

Consecrated in 1916, a turbulent year in Irish history, the Honan Chapel is considered a jewel in the crown of twentieth-century Irish art and architecture, with its collection including fine examples of the artworks of the Irish Revival, and Irish Arts and Crafts practice.

Now a huge project has seen every aspect of the Honan Chapel lovingly restored for future generations. The renowned eleven Harry Clarke windows – acknowledged as the finest example of stained glass work in Ireland – have been painstakingly restored and storm-proofed. The beautiful mosaic floor with its intricate River of Life iconographic program has been repaired and sealed by dedicated craftsmanship.

The interior of the Chapel has been repainted, and all the pews have been restored. The exterior surrounds of the limestone Chapel has been entirely repaired, repointed and sealed, with drainage works, landscaping and the restoration of original items including the decorative metal gate to its main entrance, while the external lighting has been replaced with an upgraded system.

The Chapel hosts approximately 100 weddings in a typical year with thousands of UCC alumni and others celebrating the Sacrament of Marriage in the Chapel over the years, – rugby star Ronan O’Gara is among those to have exchanged vows at its altar.

The completed renovations will be celebrated at a special mass today at 5.30pm and the public can visit the Honan Chapel daily. 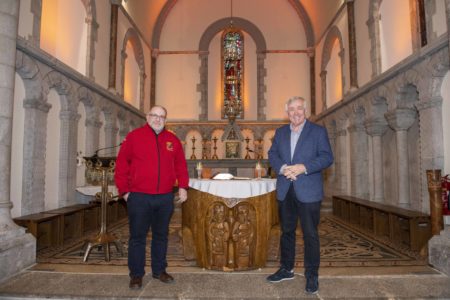 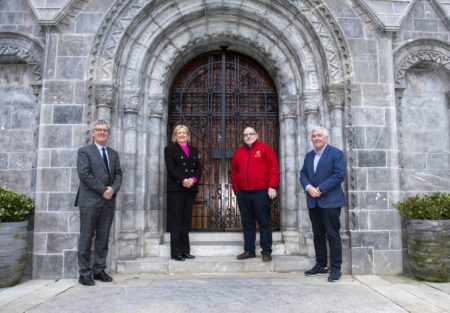 The total cost of the renovations was €1.2 million. The money was sourced from private funding through a philanthropic campaign, with the project overseen by a Development Committee chaired by Michael O’Flynn.

“The response to the call for support for the Chapel has been phenomenal, and is testament to the regard and affection in which the Honan is held. On behalf of the development committee I wish to give our sincere thanks to the generous donors, as well as the architects, conservation experts, contractors and staff who made this happen.”

Primarily a Catholic Chapel of worship in the Diocese of Cork and Ross for use by the staff, students and alumni of UCC, Fr Gerard Dunne, secretary of the Honan Trust, said the significant contribution women have made to the Chapel is often overlooked by visitors.

“The remainder of the windows in the Chapel are from the Sarah Purser studio, An Tur Gloine. Many of the Honan artefacts now in storage were the work of the Dun Emer Guild in Dublin and its founder Evelyn Gleeson. It is said that it was probably the first time in several hundred years that such items had been designed and woven in Ireland by Irish women for decoration of a church. It is wonderful that these works will endure in this special place of worship for years to come.”

UCC President Professor John O’Halloran said the entire University community is delighted to see the completion of the works.

“The Honan Chapel holds a special place in the hearts of our students and staff. I am delighted at the outcome of these works, which will preserve the Chapel’s place in the centre of our campus for generations to come, and I want to thank and commend all involved in this magnificent restoration.”