ON THE MOVE: Peter Ryan is new CEO of Aspira

Aspira is an Irish-owned international consulting and technology business. It is headquartered in Cork City Centre, having previously been in Little Island. Today the firm announced the appointment of Peter Ryan as its new Chief Executive Officer. Mr Ryan succeeds Aspira co-founder Pat Lucey who had served as CEO since the company was founded in 2007.

Pat Lucey, along with fellow co-founder Colum Horgan, are now both aged in their mid 50’s and will transition to “strategic roles on the Aspira board”.

“I am honoured to be appointed as CEO at Aspira. I have seen first-hand the reputation that Aspira has built since it was founded almost 15 years ago. The company has experienced accelerated growth, doubling in size every three years, in part due to an increased demand for technology expertise in both the private and public sector. As a result, we have expanded our operations internationally and added to our team. I look forward to continuing to work closely with Pat, Colum and the entire Aspira team, as we make our shared ambitions a reality.” 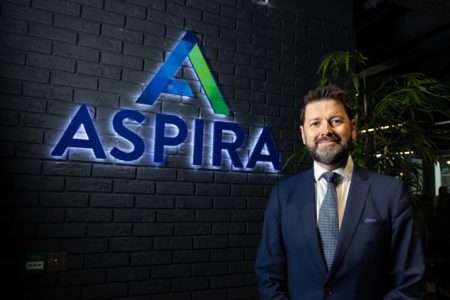 Peter Ryan, the new Aspira CEO. Educated in UCC and WIT he previously served as founding partner and board member at Agelerate.
Photographer: Darragh Kane

Commenting on the appointment of Mr Ryan, Mr Lucey said:

“This is a new phase for Aspira, as we continue to build on our reputation as the leading provider of technology project solutions, services and resources. As well as holding the role of Global Sales Director, Peter has led our European headquarters since 2018, sharing his passion for project management as a tool to bring about digital transformation with our clients across the continent. As Chairman of our board, I am looking forward to supporting Peter’s vision for Aspira, advising on our overall strategy and expanding the company’s international presence.”

“We are delighted to be able to draw on our internal talent for this next stage of growth. With his extensive background in IT services, consulting, and project management, Peter will leverage his considerable experience and deep knowledge of Aspira and our clients in his new role as CEO.”

This latest announcement follows the company’s 2021 expansion, which saw the opening of its new headquarters in Penrose Dock, Cork, alongside the creation of 40 new roles within the business and the opening of their new offices in Lisbon.