30 new #jobs in Carrigaline at Edpac

Cork, 11 April 2022: Ministers Simon Coveney TD and Michael McGrath TD joined with more than 150 employees of Edpac, the Irish manufacturer of data centre cooling equipment, to mark the full transition to The Munters Group following the recent acquisition. Based in Carrigaline, Co. Cork, Irish-owned Edpac was acquired by the global leader in air treatment and climate solutions earlier this year for €29 million. The company is actively hiring and has announced the creation of 30 new jobs within 12 months. 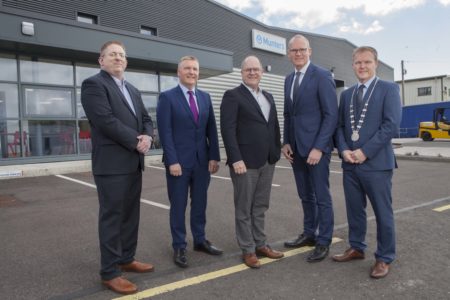 Frank Pellegrino, Munters with Public Expenditure Minister Michael McGrath, Klas Forsstrm, CEO The Munters Group, Foreign Affairs Minister Simon Coveney and Noel Lynch, Edpac MD with at the manufacturing plant in Carrigaline, Co. Cork following the Û29 million buyout of Edpac by The Munters Group, and the announcement of the creation of 30 new jobs at the plant in the coming months. Edpac will now be known as Munters.
Pic Diane Cusack

The Irish company is globally renowned for manufacturing precision cooling equipment and air handling systems, which are used in data centres around the world. Edpac’s impressive client list includes several of the largest hyperscale and co-location data centre providers in Europe, Middle East and Asia. Edpac has been a manufacturing partner for Munters’ Oasis systems for a number of years and will begin producing other Munters data center solutions for export during the coming year.

Headquartered in Sweden, Munters is a mission critical climate control products provider of energy efficient data centre cooling solutions in North America. Munters’ CEO Klas Forsström welcomed Ministers Coveney and McGrath to the manufacturing site in Carrigaline, to join in the ceremony to rename the company. Forsstörm acknowledged that the deal with Edpac further strengthens its presence in Europe.

“The European data center market is a prioritized segment for Munters and the acquisition is a significant step in our growth strategy,” said Klas Forsström, President and CEO of Munters. “Our competencies and experiences from the North American market will provide EDPAC with opportunities for further profitable growth. We foresee synergies by expanding our data center offering to Europe and by coordinating technology development and establishing unified processes. We are excited to welcome EDPAC to Munters. EDPAC brings an attractive, differentiated customer base and high-quality products.”

Welcoming the announcement, Foreign Affairs Minister Simon Coveney TD said, “Based in my hometown and constituency, I am particularly delighted to see how Edpac has grown through the years to become a globally competitive organisation. The merger with Munters will further solidify the company’s continued success, and today’s jobs announcement is a strong indication that the new ownership see the value of the talent and team here in Carrigaline, and are committed to investing and supporting the innovation here.”

Electricians, operators and project managers are among the roles that are currently being recruited at the manufacturing facility in Cork.