More than a shop – The Quay Co-op has been at the forefront of social justice campaigns locally and nationally since its doors opened, campaigning for gay rights, women’s rights and on environmental issues.

The iconic Cork vegetarian hub has employed 750 people since 1982 and provided a place for feminist, gay, lesbian and environmental groups to meet

One of Ireland’s flagship vegetarian restaurants and wholefood stores is celebrating 40 years of being at the heart of some of the most controversial movements in Ireland. The Quay Co-op opened its doors on O’Sullivan’s Quay in May 1982 and soon became the home of Cork’s first vegetarian restaurant and cafe, a food co-op, bookshop, women’s centre and creche.

Over the years the Quay Co-op has served thousands of vegetarian dishes, has been the home of countless debates and offered a warm welcome to those who sought to organise against prejudice and for equality. In the 40 years they estimate that over a million people from all over the world have passed through their doors.

The ambitious project began as a community cooperative during a time of rapidly rising unemployment. It developed into a workers’ cooperative employing 750 people over the 40 years. Today, the Quay Co-op employs 50 people between its vegetarian deli, bakery, wholefoods store and restaurant on O’Sullivan’s Quay, its vegetarian food-production facility on Cove Street and satellite stores in Carrigaline and Ballincollig. It continues to be owned by its members.

The Quay Co-op has been at the forefront of social justice campaigns locally and nationally since its doors opened, campaigning for gay rights, women’s rights and on environmental issues. It was set up thanks to a collective effort of feminist, lesbian and gay, environmental and other alternative groups and individuals. Its history has mirrored social and legislative progress in Ireland. 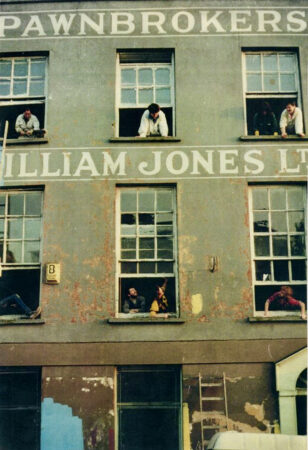 Their well known Sullivans Quay building used to be a Pawnbrokers 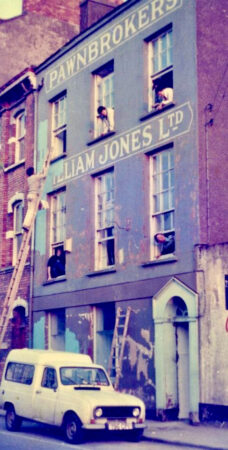 Commenting on the 40th anniversary, Co-op, Co-Founder Arthur Leahy said, “I speak for all the Quay Co-op members when I say that we are hugely grateful to the people of Cork for their continued support, it means so much to us. Reaching this milestone anniversary is down to hard work, dedication and also that spark of alternative creativity that we see in every day in the people that work here, come here and shop here. Our radical roots inform what we do to this day; they make us proud of where we work and of what we’ve stood for for 40 years. Today we face new challenges, none more so than ensuring that our future generations may respectfully enjoy this beautiful planet in peace.”

The Quay Co-op founders transformed a neglected former pawnbrokers shop on O’Sullivan’s Quay into a thriving hub. It was all hands on deck for the renovation project with members carrying out the work.

To mark the 40th anniversary, the current team has recreated an iconic photo taken in 1982. It shows the members leaning out the windows across the three floors of the building while the renovation works were ongoing.

The Co-op has expanded over the years and it now has three buildings on O’Sullivan’s Quay, number 24 and the premises on either side, one of which was previously the Cork Fire Brigade headquarters.

A special anniversary celebration will take place in ‘Upstairs at the Co-op’ restaurant on the evening of Wednesday, May 25th for supporters, suppliers and workers.

Simon Tiptaft, General Manager of the Quay Co-op says, “Ireland was a very different place in 1982 when the Co-op first opened, it was a time of rapidly rising unemployment and many people didn’t have a voice. Hundreds of people have worked at the Quay Co-op over the years but many have stayed for decades. Our team and our members are so important to us. Our customers too are savvy forward thinkers who continually spur us on to be better, to do more for the causes that will make a better future for us all. As a workers co-operative we have a unique view on trading – for us it is not about profit – if we can break even while supporting jobs and the causes that matter to us, that will do just fine for the next forty years.”