Cork’s Rockbán Ladies Football and Camogie Club, County winners in the recent Texaco Support for Sport initiative, has been presented with a cheque for EUR5,000 which will help the club to cater for its rapid growth in membership by funding the purchase of new goals, ball catcher nets, fencing and other necessary equipment for its new pitch.

Founded in 1997, the Rockbán Club is a dual ladies Gaelic football and camogie club located in Whitechurch on the north side of Cork city, incorporating the villages of Whitechurch, Carraig na bhFear and Rathpeacon. In the short time since it was founded, the club has seen its membership swell to over 300, currently fielding teams ranging in age from Under-6 up to adult level.

Under the scheme – similar to that which proved successful last year when the Cork county award was presented to Riverstown Amateur Boxing Club, Glanmire – the presentation was made to the Club by Valero Energy (Ireland) Limited, the company that markets fuel in Ireland under the Texaco brand.

Now in its second year, the Texaco Support for Sport initiative sees an annual fund of EUR130,000 set aside for allocation in equal amounts of EUR5,000 to successful applicants chosen on a county-by-county basis. Overseeing the adjudication process was Texaco Support for Sport ambassador, former Irish rugby international and broadcaster, Donncha O’Callaghan.

Entries to the Texaco Support for Sport 2023 initiative will open this Autumn. 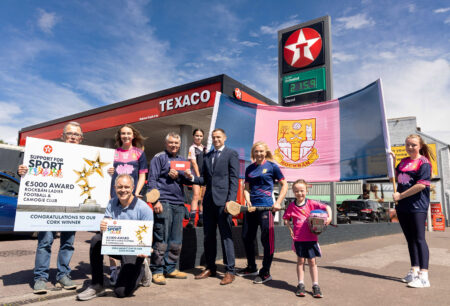