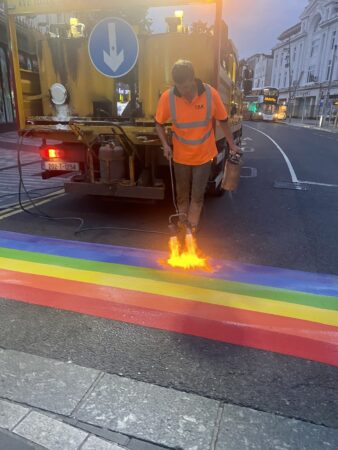 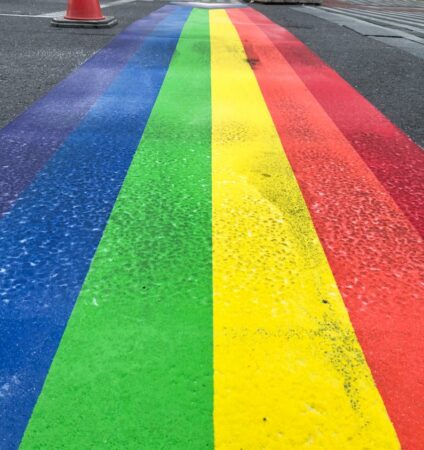 Cork is proud of being the first city on the island to formally raise the Rainbow Flag on a civic or public building, proud too that it was the first to illuminate City Hall in rainbow colours. Now at the heart of Cork City, on Patrick Street there are two Rainbow Crossings. The design is unique to Cork, incorporating as it does both the 6 bands of the traditional Rainbow Flag and also the progressive chevron representing people of colour, transgender and intersex identities.

Deputy Lord Mayor Cllr Damian Boylan welcomed these colourful and inclusive additions to the city’s public realm saying “These Crossings are a powerful and progressive symbol of the City’s support for and collaboration with Cork’s LGBTI+ Communities, we’re delighted that our Rainbow City now has some Rainbow Crossings. Commissioned jointly by the Cork LGBT+ Pride Festival and Cork’s LGBTI+ Inter-Agency Group, with the active support of Cork City Council the Rainbow Crossings are a visible and physical symbol of our commitment to being an open, welcoming and inclusive city.

I want to thank all who’ve advocated with City Council for these crossings including my fellow councillors and LGBTI NGOs but especially both groups here today for their collaborative work these past few months “ We’re very proud to have worked on getting the crossings installed : on LGBTI+ rights and recognition wonderful progress was made in the last decade but everyone knows we’re at a difficult crossroads now with LGBTI+ and many other progressive rights being challenged and eroded. These Rainbow Crossings are a timely and welcome public statement by our city in response, they say very clearly and colourfully that this is a good city in which to live, work and visit”

Clive Davis – Chairperson of the Cork LGBT+ Pride Festival CLG said “Here in Cork we’re proud of our LGBT+ community and have a tradition of championing diversity, equality, inclusivity and LGBT+ rights. These crossings are a visual celebration of that diversity but also raise awareness about the issues that are still faced by the marginalised members of all of the communities represented by the progress flag. The crossings are symbolic of the pride we have in our incredible Cork LGBT+ community and are a real example of our inclusive and progressive thinking. We hope these beautiful crossings will bring a smile to everyone who sees and walks across them and be a constant reminder of the progress we have made and the miles we still have left to travel on the road to full equality.”

Siobhán O’Dowd – Chair of Cork City LGBTI+ InterAgency Group: said “it’s really heartening to see these lovely additions to Cork: cities have and continue to be important spaces for LGBTI+ Communities allowing space to gather, to organise, to find support, and to create and participate in community organisations and to collaborate with civic and statutory bodies. We know that these crossings will send an important signal of inclusion to members of the LGBTI+ Communities but I think they will be welcomed and enjoyed by many communities. Rainbows are the symbol of hope, so we look forward to these crossings brightening everyone’s journey across the city.”

The InterAgency Group and Cork Pride acknowledged the work and advocacy of others for the crossings including NGOs the Gay Project and LINC but also city councillors most recently Cllrs John Maher and Lorna Bogue who tabled motions of support. They also thanked the many directorates within city council who provided expertise and guidance including Community Culture & Placemaking, Roads, Traffic & Operations as well as the National Council for the Blind, the Glucksman Gallery and Cork Chamber of Commerce.

The late Dave Roche who was part of both Cork LGBT+ Pride Festival and Cork LGBTI+ Inter-Agency Group used to say that flying the Rainbow was not just a symbol, it was an action! These Rainbow Crossings are a very visible and tangible action of equality, inclusion and solidarity.