The Green Party in Cork has described plans to lay twin track rail between Glounthaune to Midleton as a revolution in commuter rail for the Cork Metropolitan Area.

The proposals to lay new track on a 10km stretch from Cobh Junction to Midleton Station have opened for public consultation ahead of a railway order being submitted in September. Along with engineering works taking place at Kent Station, this will enable 10-minute frequency trains from Cobh, Midleton and Mallow to Kent Station.

“Laying this track will be a major step towards realising high-frequency commuter rail in the Cork area. The level of investment taking place all but guarantees the opening of stations at Blarney, Blackpool and eventually Tivoli. Commuting by rail is fast, dependable, and with future electrification of the rail network, quiet and low emissions.

“A route for a future light rail in Cork is expected later this year, but in the mean time, this revolution is quietly happening on Cork’s northside and in East Cork to enable high-capacity and reliable commuter services in the next few years.”

The public consultation on the Glounthaune to Midleton Twin Track Project is taking place from 26 July to 16 August. Information days will take palce at MyPlace in Midleton on 3 August and Glounthaune Community Centre on 4 August betweeen 1:00pm and 8:00pm. 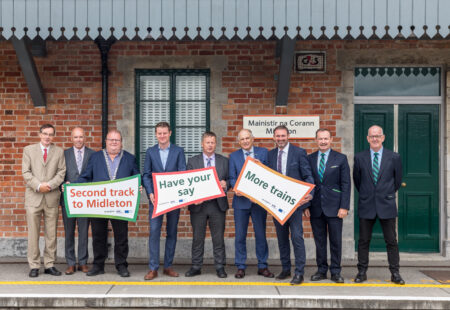 Midleton, Cork, Ireland. 26th July, 2022. At the announcement of a Public Consultation launch for the proposed Twin Track project by Iarnród Éireann which will see the upgrading of the existing rail line between Glounthaune to Midleton were; – Picture; David Creedon