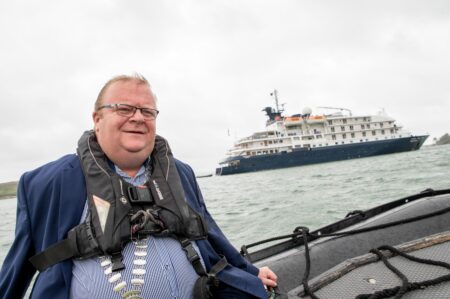 Mayor of the County of Cork Danny Collins on board a RIB on his way to visit Captain Jose Fonseca of the Island Sky Cruise ship in Schull.
Picture. John Allen

The Mayor of the County of Cork, Cllr. Danny Collins was on hand to welcome the cruise ship ‘Island Sky’ during its first visit to Schull when the Noble Caledonia vessel called to the West Cork town recently.

The luxury expedition ship, carrying 97 passengers attended by 63 crew, overnighted in Schull. The following morning, passengers boarded the Cape Clear Ferry to visit Cape Clear where they were greeted by the Birdwatch Ireland warden and guides who conducted a walking tour of the nature-rich island. Traditional Irish music band Comhaltas Baile Núis provided on board entertainment and in the afternoon passengers visited Ireland’s most southwesterly point, Mizen Head.

As is tradition, the Mayor, made a presentation to the ship’s Captain Jose Fonseca to mark the occasion of Island Sky’s first visit to Schull. Commenting on the visit, Mayor Collins said, “As a native of Schull, it was an honour to welcome the Island Sky on its maiden visit here. There was such a wonderful atmosphere on the pier as the talented traditional musicians entertained the passengers and I’m certain everyone enjoyed their trips to Cape Clear and Mizen Head. With 76% of cruise passengers surveyed on a visit to Ireland saying they were very or quite likely to return either on another cruise or on a holiday, Cork County Council is playing a long game here too. Showcasing West Cork’s natural, unspoilt beauty and culture to these discerning visitors will pay dividends in the future and we look forward to them returning to the region”

The Island Sky will return to West Cork shores in early August as part of its ‘Around The Emerald Isle’ cruise. The ship will arrive at Kinsale harbour on August 4th before departing that evening for Bantry.

Chief Executive of Cork County Council, Tim Lucey added, “Expedition cruising is the fastest growing segment of the cruise industry and West Cork’s unique harbours and islands, along with its rich cultural, historical and food offerings, make it a compelling proposition for cruise planners and their guests seeking out destinations less visited. The past two years have been challenging which is why it is wonderful to see cruise liners of all sizes returning to County Cork and to West Cork in particular.”

Noble Caledonia, a UK company in operation for over 30 years, has earned a reputation as one of the leading small ship cruise companies in the world. The Company has featured West Cork harbours for many decades, being frequent callers in the past to Glengarriff.