The Great Taste awards, run by the Guild of Fine Food in the UK, are known as the world’s most trusted food and drink awards. All products are removed from their packaging before being tasted by a panel of judges made up of food critics, chefs, restaurateurs, retail buyers, cooks, producers, food writers and journalists.

Ballymaloe Foods Pepper Relish and Steak Sauce both received a one-star award and will now be able to display the unmistakable black and gold logo, a stamp of excellence that is recognised by retailers and consumers alike. 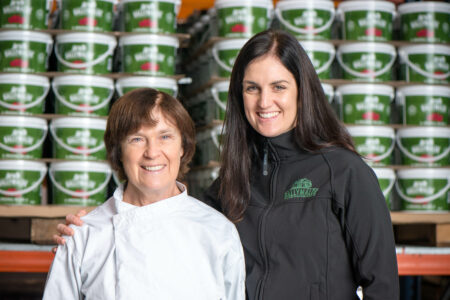 General Manager at Ballymaloe Foods, Maxine Hyde said the company is delighted with the Great Taste Awards, “We are thrilled that two of our products have been selected after being judged by a panel of 500 industry professionals. One of the judges remarked upon the quality of our ingredients which is something we’re incredibly passionate about. We go to great lengths to source local produce whenever possible. We love to collaborate with Irish producers, our award winning steak sauce contains Dungarvan Irish Stout and we’re thrilled to see that O’Donnells also picked up a Great Taste Award for their Ballymaloe Relish & Cheddar Cheese flavour crisps.”

The award judges described Ballymaloe Pepper Relish as: “Inviting sweet and fresh aroma of roasted tomato and fresh chilli with an acidic back note. We really enjoyed the slightly chunky texture and felt it was made with good quality ingredients. The mouthfeel was lovely, and the flavours very well-balanced.” The Ballymaloe Steak Sauce was described as: “It tasted like an adult tomato ketchup. The tarragon was well balanced and evident with a pleasing pop from the mustard seeds. Yummy, would lift many things like fish pie, cold meats.”

Ballymaloe Foods will host a coffee morning next week in aid of its charity partner ALONE. The event in Carrigtwohill Community Centre takes place on Saturday, August 13th from 1pm to 4pm. The Ballymaloe Foods team were asked to nominate a charity for 2022 and voted to partner with ALONE. It supports older people and helps them to age happily and securely at home.