New App for one of Cork’s key tourist attractions

Today, Spike Island launched a new immersive adventure with 15 scenes across the island, the first of its kind in Ireland. 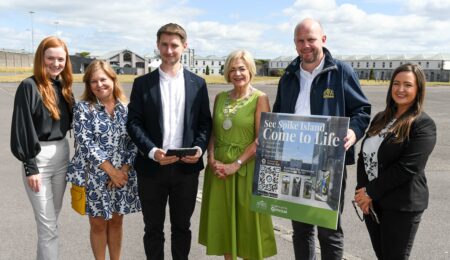 Using their mobile phone, visitors can relive historical moments from Saint Mochuda’s monastery in 600AD, to An Taoiseach Eamon DeValera’s visit, right through to the infamous prison riot of the 1980s. The Spike Island experience is the largest augmented reality experience in Ireland, covering an area of over 100 acres.

John Crotty, Spike Island’s General Manager said, “This is such an exciting day for us. Our visitors will get the opportunity to relive the stories of the Island like never before. However, this is not just exciting for Spike, but Cobh and Cork also. Attracting a world-class experience such as this to our region will further enhance our tourism offering and provide an economic boost for the region.”

Michael Guerin, Founder and CEO, Imvizar said, “It has been a pleasure to work with one of Europe’s leading tourist attractions to bring their story to life. Having first visited here in 2016, I was honoured to work with Spike Island to create a truly unique, immersive experience with them.”

Visitors to the Island will use augmented reality technology to transform the Island in a family-friendly adventure, full of twists and turns. It uses the same technology as the famous Pokemon Go game which entertains users via charcaters which they can only see via their phone.

The adventure will take around 90 minutes to enjoy and will involve fun, engaging and life-sized reenactments of the island history, in a way they have never been seen before.

Marie Toft, CEO of Emotionise AI and producer of the Spike Island experience said, “Finding the emotional hook and engaging people emotionally is what I specialise in. The wealth of history, endeavour and tragedy that has taken place on Spike Island over a thousand years gave me huge opportunities.

It was a privilege to give voice to all of the characters, especially the prisoners, most of whom lived and died tragically. I live in Crosshaven and I see Spike Island every day so it was wonderful to be part of the team to bring it all to life.”

Imvizar specialises in creating engaging experiences for the culturally curious. Their application uses a unique visual positioning tool which means the user simply holds up their phone at one of the 15 stops and helps them visualise history like never before.

The experience is available via the ‘Imvizar’ app, which also hosts experiences in Kerry, Dublin, Sligo and as far afield as Portugal. It is available on the App and Play Store now.

You can watch the teaser clip and for more information about the Spike Island experience visit: spikeislandcork.ie

Spike Island was used as an island prison on four occasions over 400 years, the first in the 1600’s holding Cromwellian prisoners.

The second in the 1840’s became the largest prison in the world, and there has never been a larger prison in Britain or Ireland before or since.

The third opened in 1921 and it held over 1200 Irish Republican prisoners during the Irish War of Independence.

While the final prison opened in 1985, and amazingly only closed in 2004! See hundreds of years of penal development, only at Spike Island Cork.