Mezzo-Soprano is August ‘Cork Person of the Month’

Mezzo-Soprano, Niamh Caitriona O’Sullivan is the much talked about new opera star in European and American concert halls and major opera houses. She is the August Cork Person of the Month and her name goes forward for possible selection as Cork Person of the Year at a Gala Awards Lunch next January 27th.

The 27 year-old rising star of the opera world has received praise for her “bewitchingly beautiful, dark vibrant voice” from some of Europe’s best known impresarios. It was in school singing with the Regina Mundi College Choir in Douglas Road, Cork, that Niamh’s voice was discovered, further nurtured and developed. She also studied at the Royal Irish Academy of Music in Dublinunder the late and legendary Veronica Dunne. Then in 2016 she moved to Munich and joined the Opera Studio at the Bayerische Staatsoper.

“Arriving in Munich as a twenty-one-year old was a major challenge,“ says Niamh “I had to learn a lot very quickly, including coming up to speed in several languages. But I love this world, the people, the music, the excitement and the spontaneity. As a freelancer, you never know what’s coming next.” 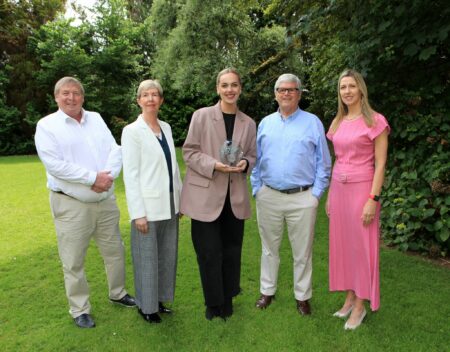 Niamh O’Sullivan from Douglas, Cork, is the much talked about new opera star in European and American major opera houses. To mark this rising star of the opera world she receives the August Person of the Month and her name also goes forward for possible selection as Cork Person of Year. Pictured at the award presentation L/R Pat Lemasney, Southern; Tina Quinn, AM O’Sullivan PR; Niamh O’Sullivan, Cork Person of the Month; Manus O’Callaghan, Awards Organiser; Niamh Lehane, Lexus Cork. Pic. by Tony O’Connell Photography.

Niamh O’Sullivan’s work to date includes, singing the role of Flora in La Traviata alongside the great Placido Domingo. She also received rave reviews for her concert performance of Der Rosenkavalier at New York’s Carnegie Hall.

Niamh’s upcoming Cork appearances include The First Child with the Irish National Opera at the Cork Opera House next month, September 17th and 18th. This opera is directed and written by Enda Walsh and composed by Donnacha Dennehy.

She will also perform in Handel’s Messiah at St. Finn Barre’s Cathedral on December 9th and 10th.

Next year, she plays Charlotte in Massenet’s Werther at the Everyman Palace on the 6th of May and will also give a solo recital at the Triskel Arts Centre on August 27th, 2023.

At the Cork award presentation, Niamh thanked her mother and father Regina and Paul, sister Nicola, for their massive support over the years.

“The gift of music can so enrich people’s lives” said Niamh “and I look forward to continuing to develop it in the years ahead.