Cork City Council was delighted this month to receive 4 Green Flags in this year’s Green Flag Awards. Both Fitzgerald’s Park and Shalom Park retained their two green flags for 2022/2023 and two new green flags were awarded for the Regional Park Ballincollig and Douglas Community Park. 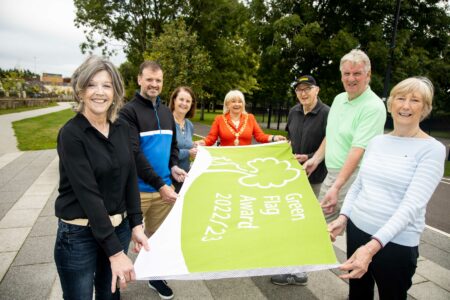 The 2022/2023 Green Flag Awards were announced today, Wednesday 14 of September 2022, by An Taisce Environmental Education, which acknowledges Ireland’s best public parks and gardens. The Green Flag Award Scheme is an international benchmarking standard for parks and green spaces and aims to encourage the provision of good quality public parks that are managed in an environmentally sustainable way.

Lord Mayor Councillor Deirdre Forde said: “We are thrilled to receive so many Green Flags and I am particularly delighted to see that two parks in the recently extended city boundary have achieved such distinction as well, the Regional Park Ballincollig and the Douglas Community Park (in partnership between Douglas Community Association, Cork City Council and Douglas Tidy Towns). Parks, Greenways, Recreation Facilities and Green Spaces have never been more needed for both physical and mental well-being by residents and visitors and particularly during the Covid-19 global pandemic. Parks provide places for people to relax and enjoy nature within the busy and bustling City environment.”

Stephen Scully, Cork City Council Parks & Recreation department said: “Receiving four Green Flags for our beautiful parks is a testament to the efforts of all Parks staff, and volunteer groups, who work tirelessly to reach such high standards required by the Green Flag criteria. All four Cork City Council Parks were independently judged in July and August, and we were today announced as winners. Our Green Flags will be raised in each park in the coming weeks.”