One of the people responsible for keeping Michael Collins Legacy alive over the decades has received the October Cork Person of the Month award.

Dermot Collins from Kinsale, one of the longest serving committee members and past chairman of the Béal na Bláth Organising Committee was named Person of the Month to mark his work in honouring and preserving our Collins history for future generations. Dermot previously served as a Kinsale Town Councillor (Town Councils were abolished in 2014). 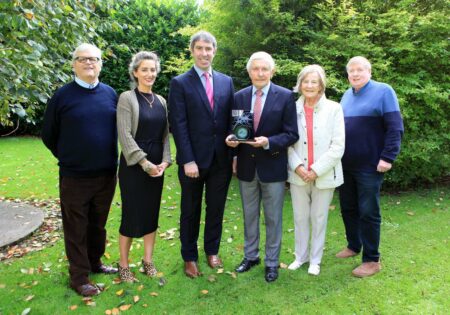 An estimated 12,000 people attended the Michael Collins centenary commemoration last August, and many thousands also followed it on T.V., to hear Taoiseach Micheál Martin say “Michael Collins deserves to be remembered as one of the greatest Irishmen to have ever lived.” Following the ceremony, the Taoiseach and Tánaiste Leo Varadkar also made a presentation to Dermot Collins and others to mark their lifetimes work of spreading the Michael Collins story.

Tánaiste Leo Varadkar offered his heartfelt thanks to the members of the Béal na Bláth Commemoration Committee, “and to your forebears, for your admirable work in making this event a worthy tribute to our lost leader, this year and every year.”

Taoiseach Micheál Martin added, “This commemoration is an important statement of remembrance and gratitude and we should acknowledge the special role which the Collins family and the Commemoration Committee have played in this over many decades.”

“Congratulations to Dermot Collins and his fellow Béal na Bláth committee members, who have been keeping the Michael Collins story to the fore for future generations. It is important that we always honour this great West Cork man as one of the truly great heroes of Irish history” added Manus O’Callaghan.

Cllr. Garret Kelleher, current Chairman of the Collins Commemoration Committee, said it was people like Dermot Collins and indeed many committees over the years that helped build the Béal na Bláth event to the huge national occasion it has become.