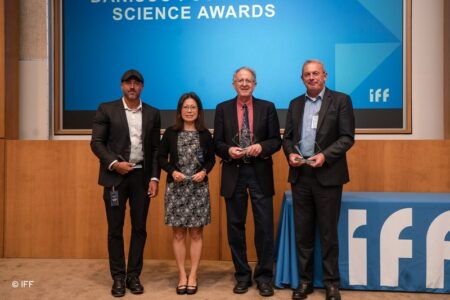 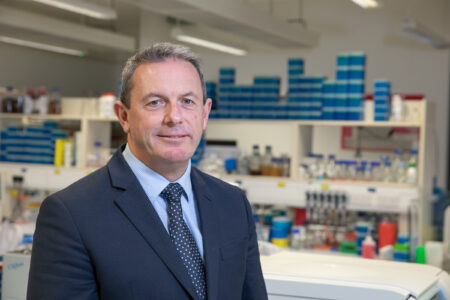 Awarded by IFF, the Danisco Foundation Awards honor leading academics advancing the future of food, nutrition and health.
In a special ceremony, Prof Ross was recognised for his work on the human microbiome in both early and late human life when the
community is at its most dynamic. His focus has been on bacterial competition in microbiomes and the discovery of techniques used by bacteria to outcompete each other. His work is aimed at developing microbiome editing tools for applications including food bio preservation and alternatives to antibiotics for animal and human health improvement.

Throughout his career, Prof. Ross has been highly active and productive in the field of microbiology, particularly how bacteria and the molecules they produce can be applied in food and pharma for the betterment of human and animal health. He is especially interested in bacteriocins: molecules produced by bacteria to kill other bacteria that have significant potential as antibiotic alternatives, which are urgently needed given the antimicrobial resistance crisis humanity now faces.

Together with collaborators, Prof Ross has pioneered the discovery and application of an arsenal of bacteriocins from an array of diverse bacteria.

Many of these bacteriocins and their producing bacterial strains are now used in the food industry as food safety agents that prevent the contamination and spoilage of food, but their clinical and veterinary potential have also been proven. For example, Prof.
Ross and his colleagues have shown that the bacteriocin Lacticin 3147 and its producing strain are as effective as antibiotic therapy in the treatment of bovine mastitis. The team also discovered a potent but highly targeted bacteriocin, Thuricin CD, against
the pathogen Clostridioides difficile (C diff), the causative agent of C diff-associated disease – Adiso Therapeutics, an APC Microbiome Ireland spin-out company co-founded by Prof Ross and his APC colleague Prof Colin Hill, now focuses on the development
of similar therapies for the treatment of infectious and inflammatory diseases.

“Narrow spectrum antimicrobials that only kill the infectious microbe are the way forward,” says Prof. Ross “because they exert minimum if any collateral damage to the surrounding microbiota which is an essential prerequisite for any antimicrobial now that we know how important the microbiome is to human health.”

In addition, Prof. Ross and colleagues have demonstrated that bacteriocins can be modified through bioengineering to generate more potent targeted antimicrobial molecules. The team continue to discover new bacteriocins by mining microbiomes, using state-of-the-art methodologies alongside traditional microbiology techniques.

Prof. Ross has also been fundamental in the development of technologies for the stabilization of probiotic cultures in food and pharmacological preparations and has collaborated closely with industry throughout his career.

Through his collaborative work with another APC colleague Prof Catherine Stanton, he is also investigating the role of the microbiota in programming development of newborn infants and the opportunities for producing knowledge-based dietary interventions to improve human health at this most vital early stage.