The Irish Association for Counselling and Psychotherapy (IACP) has honoured Tom Meade MIACP of Killeagh, East Cork with the Southern Regional Award. 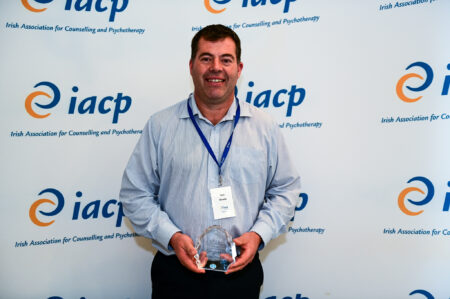 Mr Meade has served on the Southern Region Committee for many years and became chairperson in 2015, a
role he approached with dedication and loyalty. He has been a vital resource in the establishment of
committees in other areas of the country, expanding the opportunities for networking and educational
workshops for IACP members. Tom divides his time between his twin passions for farming and his counselling
practice, supporting people who want more from life. He is based in Ballyglassin, Killeagh and offers in-person
and online counselling.

“I congratulate Tom Meade our Southern Regional Award recipient for the many outstanding contributions he
has made to the counselling and psychotherapy profession. Tom is known for his support of members and his
commitment not just in his region but all over the country.” Tom played a key role in the formation of the
Western Regional Committee, which was officially launched at a network event in May of 2016.”

The awards ceremony was at the IACP 7th annual conference held on the 15th of October 2022 at the Galway
Bay Hotel.

The IACP was established in 1981 to identify, develop and maintain professional standards of excellence
in counselling and psychotherapy. Our work promotes best practice and the development of the
profession. The IACP represents more than 5,000 members based in communities all over the country
and is the largest Counselling and Psychotherapy Association in Ireland. More information is available
from the IACP’s website www.iacp.ie