The bar formerly known as ‘Souths’ is gone, but fear not it’s just been renamed, and redesigned. The landmark drinking establishment of the Imperial Hotel on the South Mall has been rebranded ‘76 On The Mall’, and the interior has changed.

Whats happening?
Almost €1 million has been spent upgrading the Imperial. Next year the property will celebrate it’s bi-centenary – or 200th anniversary – the four star Hotel is owned by the Flynn family. It has undergone an extensive renovation programme with the first phase now finished So far, almost half of the 125 bedrooms have been renewed and refreshed with the remaining rooms to be revamped in winter 2015 and spring 2016. 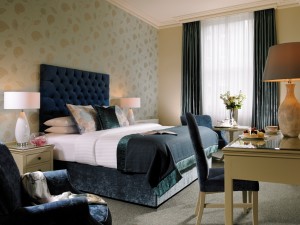 There is also a new gym, the Escape Gym, which has been built for Hotel guests use only.

The Imperial Hotel forms part of Flynn Hotels which includes Newpark Hotel, Kilkenny, Old Ground Hotel, Ennis and The Park Hotel, Dungarvan and are run by John, Allen and Pierce Flynn. The Imperial is regarded by many as the ‘Grand Dame’ of the city. Built two hundred years ago by commercial merchants it exudes an old world, glamorous charm and is set in the heart of the city, on South Mall, just minutes from the world famous English Market and the main shopping and commercial centre of the city.

Tell me more about the Bar 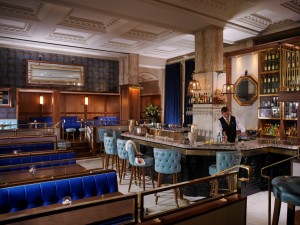 The interior of the new bar, ’76 On The Mall’, has been inspired by the work of the great Irish architect and interior designer, David Collins who specialised in designing the interiors of bars and restaurants in London and was famous for his clean, cool brand of glamour. He expertly blended textures – smooth with rough, matt with reflective and all perfectly judged. Collins’ signature colour was blue which he used in countless shades to great success. 76 On The Mall features various tones of blue to create a sophisticated but relaxed environment to eat or to enjoy a drink with friends. Private booths for dining have been upholstered in navy leather while cornflower blue high stools with curved backs and buttoned detail are placed around the marble topped bar. The various shades of blue, together with marble, glass and stone have created a somewhat nautical, summer sky, holiday feel -76 feels like you could be at the coast or indeed in the Hamptons. The bar is open daily and serves lunch, dinner and a large selection of wines, prosecco and craft beer and is already proving to be a popular choice for elegant, informal dining for Corkonians and hotel residents alike.

The hotel itself has a rich history, it was designed by Thomas Deane in 1813 and was initially used as commercial rooms for city merchants. In 1816 the building was extended to serve as a hotel and coach yard for the visiting business people, traders and merchants. Several famous figures have stayed in the hotel over the years including Fr. Mathew, The Temperance Priest, writers Sir Walter Scott, William Makepeace Thackeray and Charles Dickens. One of the most famous figures was Michael Collins who negotiated the Irish Free State Treaty in 1921 and who spent his last night on earth in room 115 at the Imperial before he was shot on that fateful day in August 1922 at Béal na Bláth, back then South Mall was had two-way traffic, and Collins’ car travelled from the Imperial towards the Grand Parade.

The Imperial has many untold stories, the stories of the people of 200 years ago and the stories of the guests who come and stay and eat, drink and chat within the 200 year old walls. If only the walls had ears! What would they say? According to a spokesperson for the Hotel “The new chapter in the story of this old Grand Dame of Cork is just beginning and the Flynn family are the new story tellers and keepers of this newly redefined hotel.”

“Too sick to work, but had to work”
Previous Post
Seven years is too long to wait says Burke