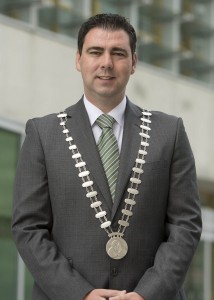 The Mayor of the County of Cork, Cllr. John Paul O’Shea today launched a brand new dedicated Facebook and Twitter page in order to keep the people of Cork connected with him in his role as Mayor.

The initiative, which is the first in the Council’s 116 year history, will be used to keep the people of Cork up to date with the work he is doing in his role as Mayor and also keep the public informed regarding the on-going work of the Council.

Commenting on the new social media initiatives, Mayor O’ Shea said “I want to be as accessible and visible to the people of the county as possible during my term. The position as Mayor of the County of Cork is indeed a very prestigious and honourable role and I intend to make every effort to ensure that the people of the county are constantly aware and updated on the work the Mayor’s office does”.

The Mayor’s Facebook page can be followed by clicking on the following link and liking the page: www.facebook.com/CorkCountyMayor

Mayor O’ Shea added “Social media is an up and coming way of keeping in touch with the people of Cork and more and more people are using it in their daily lives. I believe it is vital Cork County Council and the office of Mayor of the County of Cork embraces this opportunity in order to keep the public up to date on the work of the Mayor. I look forward to keeping in touch with the people of Cork during my year as Mayor and also through the other forms of communication open to me”.