Ireland’s newest co-creation space, The Entrepreneur Ship, was officially opened today (Monday) by Minister for Agriculture, Food, the Marine and Defence Simon Coveney, T.D. The new centre seeks to optimise the well documented opportunities of the blue economy for Ireland, and accelerate job creation in this sector.

Speaking at the opening of The Entrepreneur Ship, Minister Simon Coveney, TD said: “The government has ambitious plans to grow Ireland’s marine economy to maximise the potential of our vast marine resources. Business incubators, accelerators, and co-creation spaces have been proven to support and fast-track start-up companies seeking to exploit emerging market opportunities. The Entrepreneur Ship is the first dedicated marine innovation centre in Ireland providing companies with access to an ecosystem of world class training, talent, research and test bed facilities through the IMERC partners in Cork. 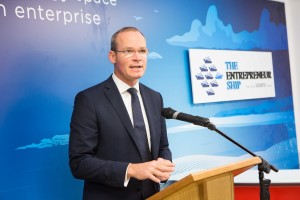 This unique space will provide new and existing companies in the maritime sector with the supports that they need to grow and innovate. I am delighted to officially open it today,” he added.

Companies based in The Entrepreneur Ship are located in the IMERC Cluster in Lower Cork Harbour, adjacent to the National Maritime College of Ireland (NMCI), the Irish Defence Forces Naval Base and University College Cork’s new Beaufort building which houses the MaREI Research Centre and the LIR National Ocean Test Facility.

“The Entrepreneur Ship is a place of convergence between entrepreneurial talent, and the explosion of new ideas and technologies coming from areas such as robotics, big data, biotechnology, power generation, cyber security, unmanned systems, and power storage as they relate to our ocean and energy systems,” said Val Cummins, Director of IMERC. “The objective is to grow this enterprise dimension to add to the critical mass of training, research and naval expertise already in the cluster.”

A number of exciting startups as well as established international companies are already availing of the facilities and supports at the new maritime innovation centre. These are in addition to the success of the Science Foundation Ireland MaREI Centre in collaborating with 50 industry partners in the research and development space.

“DARE Technology, an innovative engineering startup specialising in marine renewable energy, are already located on The Entrepreneur Ship. Supported by the Local Enterprise Office and designated by Enterprise Ireland as a High Potential Startup, DARE are developing a wind turbine for marine vessels that has the potential to remove up to one million tonnes of C02 from the atmosphere each year,” said Martin Wall, Manager of The Entrepreneur Ship.

“Another startup, Exceedence– a UCC/MaREI spinout – has developed software that will provide financial analytics solutions to developers in the marine renewables sector. A third startup, UAV Evolution are developing an unmanned aircraft that will support offshore activities in some of the harshest conditions on the planet, in fact they have recently attracted substantial funding from overseas investors to further develop and commercialise this aircraft,” he added.

These companies are located in the same space as Black & Veatch, a large engineering multinational company with over 10,000 employees worldwide, who this year opened two offices in Ireland, one in The Entrepreneur Ship and the other in Dublin to strengthen its support for Ireland’s water and energy sectors.

It was also announced that Marine Resolute Ltd. won the IMERC Innovator of the Year Award with their desalination technology. Resolute are a virtual member of The Entrepreneur Ship community. Dr. Karen Twomey, Tyndall National Institute was announced as the runner up.