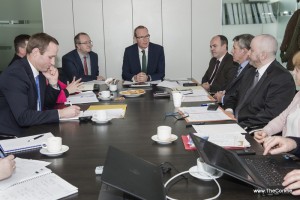 Minister for Agriculture, Food and the Marine, Simon Coveney T.D., announced details of the timetable for a two and a half year programme of core remediation works at Haulbowline Island which will see the remediation of the Island completed by mid 2018 at a meeting of the Haulbowline Remediation Project Stakeholders group today (8th Jan 2015). This follows a Government decision to provide a total of €61,000,000 to remediate the location on a “whole of Island basis”, incorporating both the East and South tips and including a ground level remediation of the former ISPAT/Irish Steel factory site.

At the meeting the Minister outlined the elements involved in the remediation timetable, the Minister stated, “These works, which are part of the Government’s wider commitment to Cork Harbour will, when completed, lead to the permanent transformation of the Island and provide significant potential for development in the coming years. The remediation project will see the former waste site at the East Tip become a large public amenity park and a ground level remediation of the former factory site, opening up significant development possibilities for this key strategic location, already the permanent location of the Irish Naval Service. These complex remediation works which have been devised by Cork County Council who are acting as agents of my own Department in this project, will provide significant employment (for the duration of the works) and eventually ensure that the historic Island of Haulbowline will have a very bright future at the centre of Ireland’s existing dedicated maritime cluster in Cork Harbour”.

Minister Coveney also outlined that he is actively considering the repair of three large cut stone buildings adjacent to the former ISPAT/Irish Steel factory. The Minister said “These three landmark buildings which were part of the old Naval Base and were also office accommodation for the steelworks have fallen into disrepair over the years. To prevent further deterioration of these impressive historic buildings I have asked my officials to bring forward immediate proposals for consideration by the Government on how to weatherproof the structures and undertake necessary measures to safeguard these heritage assets for future generations.” 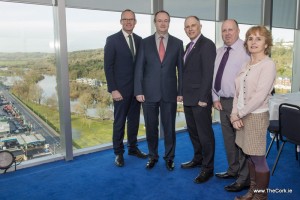