The largest travel trade fair in the world, ITB in Berlin, is taking place this week. Twenty-two (22) tourism companies from Ireland and Germany have joined Tourism Ireland at the fair, in a bid to grow Ireland’s share of the German travel market – the world’s third-largest outbound travel market.

Germany is the third-largest market for tourism to Ireland and is estimated to be worth close to €400 million annual to our economy. Last year was another record year for Irish tourism from Germany – when we welcomed almost 630,000 German visitors, an increase of +13% on 2014. Tourism Ireland is rolling out an extensive programme of promotional activity again in 2016 – to keep the momentum going and build on that growth. 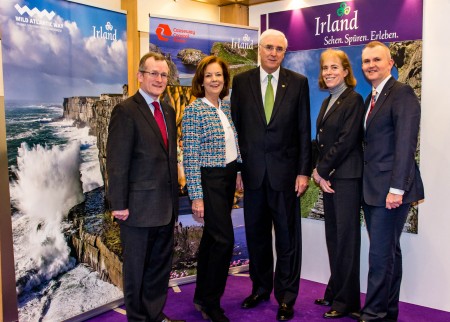 ITB (Internationale Tourismus-Börse) is the biggest travel promotion of the year – attracting some 175,000 visitors from 186 countries across the world. Of these, about 115,000 are trade visitors – including leading tour operators, travel agents, airlines, travel media and bloggers – not just from Germany but from all over the world. The five-day event provides a valuable opportunity to network, negotiate and exchange vital contracts with the influential international tour operators and travel agents in attendance.

With so many destinations all competing for business at ITB, Tourism Ireland’s aim is to stand out from the crowd and capture the attention of the influential audience at the show. The Wild Atlantic Way, Causeway Coastal Route and Ireland’s Ancient East are just some of the key themes being highlighted by Tourism Ireland at this year’s ITB.

Speaking at ITB Berlin, Niall Gibbons, CEO of Tourism Ireland, said: “The large representation of our industry partners on the Tourism Ireland stand at ITB this year is extremely welcome – and essential in the highly competitive global marketplace. Germans who are interested in taking a holiday which involves sightseeing and local culture remain our core audience; we are also targeting people who engage in outdoor activities while on holidays. ITB provides an excellent opportunity to spread the word about all the great things to see and do in Ireland.”

More than 14 million Germans have been seeing ads for Ireland on national TV this spring; the Tourism Ireland campaign kicked off earlier this year, on channels like ARD, Sat1, RTL, VOX and Kabel 1. An online video campaign is running on Facebook; and information about the island of Ireland has also been placed on premium sites such as focus.de. In 2016, Tourism Ireland will invite 230 top German journalists to visit the island of Ireland – generating positive publicity worth more than €45 million. Co-operative campaigns with carriers like Aer Lingus and Irish Ferries are promoting ease of access to Ireland from Germany; and Tourism Ireland is also working with major tour operators like Dertour and online travel agents such as Opodo and Weg.de. More co-op campaigns with other key partners will be rolled out during the year.