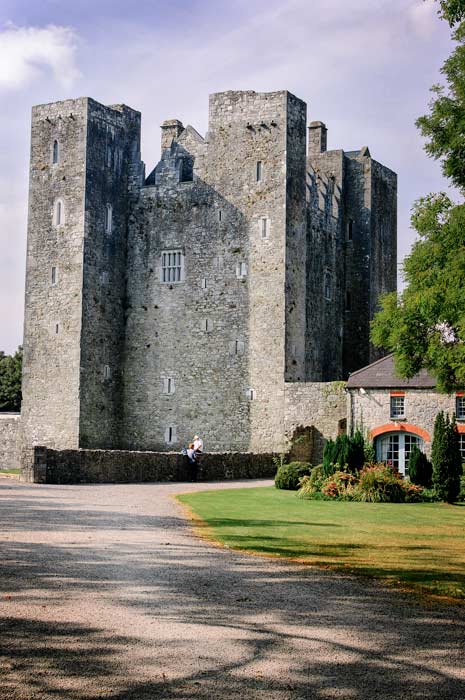 Barryscourt Castle (Caisleán Chúirt an Bharraigh in Irish) is a castle located in East Cork south of the village of Carrigtwohill.

Cork MEP Deirdre Clune today launched a book which is a major study of Barryscourt Castle. The launch took place at nearby Fota House. The MEP was there on behalf of the Minister for Arts, Heritage, Regional, Rural and Gaeltacht Affairs, Heather Humphreys TD.

The main author of the book, well-known archaeologist Dave Pollock, directed excavations at Barryscourt from 1996 to 2000 and again in 2015. These extensive excavations in the bawn of the castle have thrown considerable light on the use of the site over a lengthy period from early medieval times up to the nineteenth century. The book also contains an authoritative history of the Barry family up to the seventeenth century by Cork historian Dr Paul Mac Cotter and a description, analysis and full survey of the castle as well as an account of its restoration.

Recently commissioned radiocarbon dates indicate that the castle was built around AD1400. The likely builder was John Ciotach Barry, who was Lord Barrymore between 1393 and 1420. A later Lord Barrymore, David Barry, deliberately damaged the castle while in rebellion in 1580 but restored it after he was pardoned. This is recorded in carved inscriptions within the building. It ceased to be a lordly residence in the mid seventeenth century and the upper hall of the tower house was used as a grain store in the eighteenth and nineteenth centuries.

Initially acquired by the Barryscourt Trust in the late 1980s, the castle was subsequently taken into State care as a National Monument and fully restored. It is currently closed to visitors, while rewiring and other necessary works are being undertaken, and is expected to reopen again in 2019.

Deirdre Clune dedicated the book to those who were very much involved in the actual work of restoration at Barryscourt, including the OPW works teams at the Mallow and Kilkenny National Monuments depots and the District Works Managers, William O’Malley and John O’Connell. It is also dedicated to the memory of Noel Jameson and Robert Williams, who were very much the public face of Barryscourt for many years and the late Judith Monk, who co-authored the first book on Barryscourt.

The book can be purchased from bookshops or directly from www.wordwellbooks.com