CORK HARBOUR: Toxic waste dump on Haulbowline Island to be transformed into public park – another milestone has been reached

Contracts signing signals the beginning of a park at Haulbowline

Mayor of the County of Cork, Cllr Declan Hurley warmly welcomed this signing and noted the importance of the remediation of Haulbowline Island, “This project is hugely important from a local and national level.  We have come a long way with this and I am in no doubt that we will have a fantastic park for the people of Cork but will also offer another jewel in the crown for Cork tourism.” 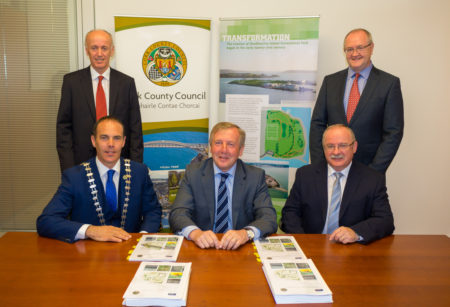 Haulbowline Island is the base of the Irish Naval Service and was the location of Ireland’s only steelworks which operated on the Island between 1939 and 2001.  Waste from the steel production process was deposited on the Spit Bank, a shallow sand spit extending eastwards from the Island, from the early 1960’s.

In August 2011, Cork County Council, acting as Agent to the Minister of Agriculture, Food and the Marine, embarked on a programme for the rehabilitation of the East Tip, Haulbowline Island, Co. Cork.  The Council have since been addressing the legacy associated with the disposal of steelwork’s waste on a sand spit in Cork Harbour over this 40 year period.


Map: The Eastern side of Haulbowline Island (the right hand side on the above view)
contains industrial waste.

The Council have been committed to ensuring that the remedial solution and amenity development are completed in accordance with current relevant national and international best practice and guidance.

Appointed contractors, PJ Hegarty and Sons Director Seán Carrigy spoke of the importance of this project, “P J Hegarty & Sons are delighted to be involved in this prestigious project, and we look forward to working with Cork County Council and all stakeholders in transforming this site into a valuable amenity which will bring long term environmental and economic benefits to Cork Harbour.”

Also speaking at the signing, Deputy Chief Executive of Cork County Council Declan Daly highlighted the significance of this milestone, “This project has been many years in the making and is the result of a tremendous amount of work. The redevelopment will be an enormous benefit to local communities and will join the ever increasing number of amenities within Cork Harbour.”

These sentiments were reiterated by Minister for Agriculture, Food and the Marine, Michael Creed TD, who commented, “I am very pleased to be here today for the contract signing for these crucial works to remediate the East Tip site at Haulbowline Island. This phase of works marks the start of a significant period of construction activity on the island and a major step towards the transformation of the East Tip into a great asset for the communities and other stakeholders located around Cork Harbour and beyond.”

The objective of the Haulbowline Project is to address the legacy associated with the disposal of steelwork’s waste on a sand spit in Cork Harbour over a 40 year period through the remediation of the site and its transformation into a public recreational amenity for the beneficial use of the local communities.

The regularisation process was initiated on foot of a European Court of Justice Judgement (ECJ494/01) and associated Letter of Formal Notice [C(2010)6536].

This reclaimed foreshore, which is 9ha (22 acres) in area and contains approximately 650,000m3 of waste, became known as the East Tip.  A planning application seeking consent to remediate the East Tip and transform it into a public recreational amenity (encompassing a car park, playing pitch, walking/jogging circuit, picnic areas, viewing points)  was submitted to An Bord Pleanála (ABP) and the associated waste licence application was submitted to the Environmental Protection Agency (EPA).

Planning permission was granted on 1st May 2014 while a waste licence was granted on 23rd July.  With the grant of the Foreshore Licence on 21st November 2014 all the consents necessary to facilitate the remediation project are in place. In the intervening period the Council has been focused on extensive procurement and design activities which have concluded with the appointment of PJ Hegarty & Sons/EMCC JV on Monday 10th July 2017.

Cork County Council is committed to delivering a high quality product in an environmentally and financially sustainable manner by complying with the planning and waste licence conditions while facilitating value engineering through the promotion and implementation of innovative solutions throughout procurement, design and construction.