Nin is a brother of Peter O’Leary’s, the man competed in the Olympics for Ireland in 2008.​ 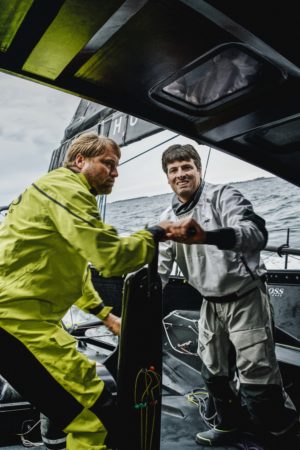 Speaking ahead of the race; British skipper Alex Thomson, who finished second in the Vendee Globe earlier this year stated ‘I am looking forward to taking part in the Fastnet again and to have Nin as my co-skipper. It is great to be able to support the new generation of offshore sailors.’

O’Leary, a young, talent in offshore sailing has been training with the Alex Thomson Racing team this summer and assisted the team in preparations ahead of the Vendee Globe in 2016 where he completed over 1500nm onboard HUGO BOSS. O’Leary stated ‘I am thrilled about the opportunity to race with Alex and onboard HUGO BOSS. Alex has set the benchmark in offshore sailing and being chosen to co-skipper the boat with him is a huge honour and allows me to start the preparation for my own Vendee Globe campaign in 2020. We are looking forward to a great race together.’

This year is the 47th year of the Fastnet Race, now sponsored by Rolex, and the race is limited to 340 entries.

PICS: Honda competition will award €5k to a Cork Community Project
Previous Post
Cobh is “One of Western Europe’s best cruise destinations” – according to Cruise Critic