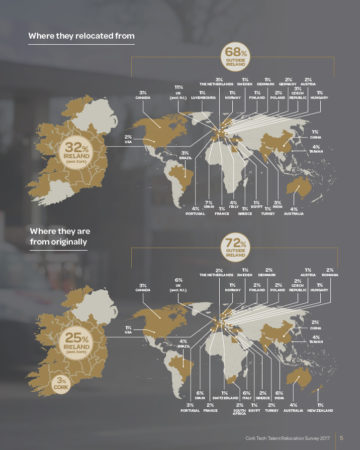 Cork is proving to be a magnet for tech workers in search of better career opportunities, work-life balance and quality of life

A new survey has found that highly-skilled tech professionals from all over the world are moving to Cork for a better quality of life, career opportunities, shorter commutes and lower living costs.

The report included responses from workers of 27 different nationalities with two thirds having relocated to Cork during the last two years. Respondents relocated from countries such as China, the US, South Africa, France, Egypt and the Netherlands.

Fast becoming an international high-tech hub, Cork is attracting a large number of foreign and indigenous tech start-ups — 84% of respondents to the survey currently work in the city’s buoyant IT sector.

More than 85% of those surveyed said they were satisfied or very satisfied with their relocation. And 80% say they now have a better balance between their work and home lives.

Some 85% now have a commute to work of less than 40 minutes and 78% said they did not consider it difficult to find a job in Cork.

Interestingly, while 27% of those who moved back were originally from Ireland, some 73% relocated from outside of Ireland.

When asked about the factors which influenced their move to Cork, 73% cited a better quality of life while 72% referenced a reduced cost of living. The other main reasons given were: lower property prices, less traffic, career opportunities, beautiful scenery and a safer environment.

Among the survey’s other key findings were:

Rory Walsh, Collins McNicholas, Cork Regional Manager, said:
“The Cork region is experiencing a surge in the number of international professionals who are moving to the region for the work life balance that both the culture and economic environment can facilitate.

“The draft National Planning Framework (NPF) has acknowledged the role of cities as drivers of economic development. Cork, as the second largest city in Ireland, is well placed to take advantage of this, leveraging existing strengths and economic successes especially in FDI in the Life Sciences, ICT and internationally traded services sectors.”

“A University City with over 30,000 full and part-time students across several colleges; strong established industry clusters; an expanding international airport on its doorstep; a cosmopolitan city with a rich mix of different nationalities; a rich heritage and history; and a great quality of life – these are some of the factors that have attracted both international companies and people with skills and talent to the area.” 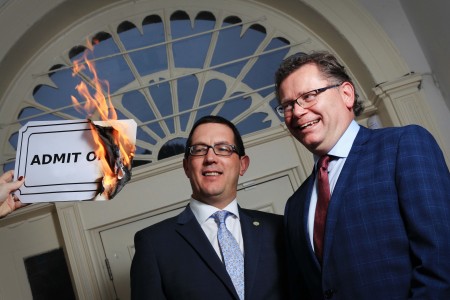 File photo from early 2017 of Cork Chamber CEO Conor Healy. Incidentally, in this picture, he was pictured promoting tickets for The Cork Chamber Annual Dinner in Dublin, which sold out quickly (hence the flaming ticket visual). Now, Cork is competing with Dublin as an attractive place for Tech workers. Pic: Diane Cusack

Conor Healy, CEO, Cork Chamber of Commerce, said:
“This is the most exciting time in recent Cork history in terms of growth, opportunities and potential. Cork currently has the highest level of job creation in the country.

“There are significant opportunities where people can build a career and move across various companies within strong clusters such as ICT, life sciences, energy, marine, agri-food, tourism and financial services.”