By TheCork.ie on 14th December, 2017Comments Off on CORK RADIO: Keary’s Hyundai to sponsor Neil Prendeville Show on RedFM 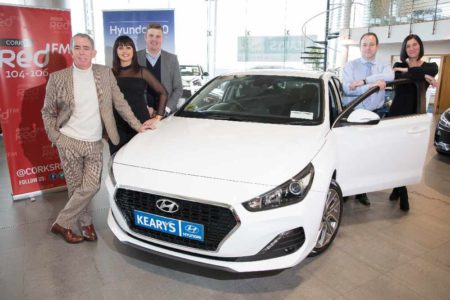 Cork’s RedFM are have announced that Keary’s Hyundai have signed up as the new sponsors of the award winning Neil Prendeville Show.

The sponsorship announcement comes on the back of the Neil Prendeville show picking up the Interactive Speech Programme of the year award at the IMRO Radio awards for the second consecutive year. Speaking at the launch of the sponsorship at Keary’s main dealership on Kinsale Road, Director of Sales at Cork’s RedFM Grainne Murnane said “we are delighted to have one of Ireland’s biggest Car Dealerships sign up as sponsor to one of Ireland best talk programmes and continue the excellent relationship between Cork’s RedFM and Keary’s over the years”.

Neil Prendeville has been the most prominent voice on radio in Cork over the past 25 years, previously working with another Cork station. He stirs public debate and ignites the opinions and passions of Cork people. His RedFM show airs weekday mornings between 9am and 12pm or on redfm.ie/player