Tourism Ireland’s extensive programme of promotions in Germany continues this week – with a strong presence at CMT (Caravan, Motor & Tourism Fair) in Stuttgart. Tourism Ireland is joined at CMT by 18 Irish and German tourism businesses, including the Irish Caravan and Camping Council (based in Mitchelstown). 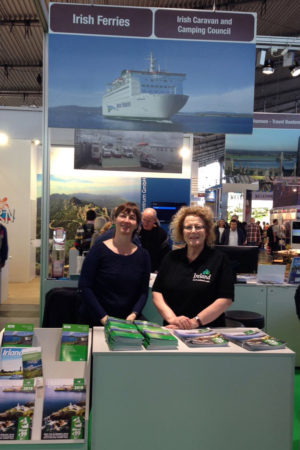 In 2017, around 235,000 visitors attended this nine-day travel fair – including more than 1,500 journalists from 21 countries. CMT also attracts leading tour operators and travel agents, as well as many thousands of German holidaymakers looking for ideas and suggestions for their next holiday.

“CMT in Stuttgart is our first travel fair of the year, providing an excellent opportunity to spread the word about the many great things to see and do in Ireland and to encourage German travellers to put Ireland on their holiday ‘wish-list’ for 2018,” said Zoë Redmond, Tourism Ireland’s Manager for Central Europe. “2017 was the seventh consecutive year of growth for German visitor numbers to the island of Ireland, when we welcomed around 660,000 German visitors. Tourism Ireland will roll out an extensive and targeted programme of activity throughout 2018 – to keep the momentum going and build on that growth.”

Earlier this month, Tourism Ireland launched its TV campaign in Germany. Ads for Ireland will run until mid-February on national and satellite television channels like RTL, VOX, RTL Nitro, Sat.1, Kabel 1 and ARD – reaching an estimated 17.2 million viewers. As well as the TV ads, a separate online video campaign will reach almost 4 million people, via popular travel and news websites.

Promoting the Wild Atlantic Way, Ireland’s Ancient East and Dublin will continue to be a major focus of Tourism Ireland’s activity in Germany, and elsewhere around the world, in 2018. The organisation will also continue to highlight ease of access from Germany to Ireland.

SAILING: Volvo Cork Week entries off to a winning start
Previous Post
Did you know?: There are 18 Consulates in Cork