WEST CORK: Tubs Highlights the Wild Atlantic Way as he Broadcasts from Clonakilty 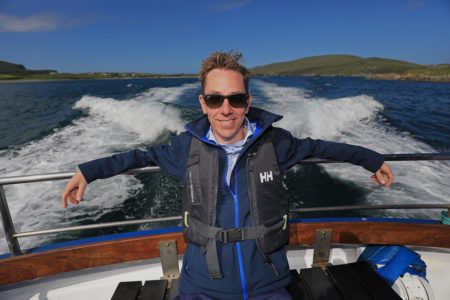 A swell day…Ryan Tubridy, out and about around the Skellig Coast from Portmagee, Co Kerry, on board the Lady Clare last year, as Fáilte Ireland joined forces with the show,‘Tubs on the Wild Atlantic Way , as part of its ‘Embrace the Wild Atlantic Way of Life’ summer marketing campaign. Photo: Valerie O’Sullivan

While in Clonakilty, Ryan will be interviewing some local tourism businesses from the surrounding area and engaging in a number of activities that are available to visitors who come to West Cork. Included are whale and dolphin watching with Mark Gannon, Courtmacsherry Sea Angling Centre; visiting the spectacular Inchydoney Beach; taking the ferry to visit the beautiful Garnish Island, to learn about the historic links between the newly refurbished Bryce House on Garnish Island and Derrynane House, the ancestral home of Daniel O’Connell – Irish politician and statesman.

Fáilte Ireland is encouraging everyone to come out and attend the broadcasts. The arrival of the popular RTE Radio 1 show is much anticipated and Fáilte Ireland’s Head of the Wild Atlantic Way, Miriam Kennedy, who herself will be interviewed by Ryan, said –

“Spectators coming down to watch the broadcast in Clonakilty can expect to see plenty of festivities, interviews, live music as well as hear about local tourism highlights. We are encouraging everyone to come on down and join in the fun and discover ways to ‘Embrace the Wild Atlantic Way of Life’ through the airwaves.”