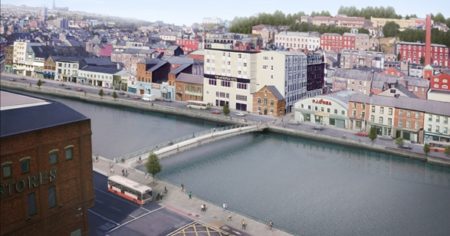 Construction of the €5 million Harley’s Street Pedestrian & Cycle Bridge, linking the city centre and Victorian Quarter, is to start this month.

It’s expected that when fully operational, up to 11,000 pedestrians and cyclists, travelling between the city centre and the Victorian Quarter daily, will benefit from the improved connectivity and convenience provided by Harley’s Street Bridge. The Victorian Quarter includes Mac Curtain St and the surrounding area.

Cork City Council has awarded the contract for the construction of the bridge to L & M Keating Contractors. L&M Keating operate nationally and internationally and recently completed local projects such as the re-development of St. Angela’s College on St Patrick’s Hill and Perrott’s Inch Pedestrian Bridge at University College Cork.

Lord Mayor, Cllr Mick Finn said: “ Thanks to the work of the bridge designers ARUP & Wilkinson Eyre Architects , the new bridge will fit sympathetically with the surrounding quays, buildings and city centre environment while maintaining the views along the river, Shandon and the northern suburbs. It will give the river the elegant crossing that it deserves.”

Construction activity will commence in mid to late July with the initial phase of work consisting of site set up and diversion of underground utilities.

The bridge itself will be fabricated off site by Thompsons of Carlow between July this year and February 2019.

Bridge sections will be transported by truck to the lower harbour for final assembly and finishing. The finished superstructure will be placed on a barge and transported by river to the city centre. The barge journey will be timed to coincide with the optimum tide level for clear passage under Brian Boru Bridge before arrival at its final destination in the city centre in April 2019.

The bridge will be lifted by crane from the barge in one overnight operation which will require the complete closure of both quays for the duration of the lift.

In parallel with the fabrication of the superstructure, minor traffic lane alterations will be required in the area where the bridge abutments ( supports) are being put in place. These lane alternations will be in place until October and consist of the following:

Two lanes of traffic will be maintained on St Patrick’s Quay with minor restrictions for bus and private parking to facilitate traffic flow around the bridge site.

Three traffic lanes will be maintained in the vicinity of the bridge supports on Merchant’s Quay. Two westbound lanes (one bus lane and one general traffic lane) plus one eastbound lane will be in operation for the early stages of construction with the remaining traffic restrictions lifted as soon as possible.

Cork City Council would like to thank the project sponsors, The National Transport Authority & Southern Regional Assembly for their ongoing support for the scheme. Cork City Council also want to thank our many stakeholders including local business, Bus Eireann, the public and the many public & private bodies that have contributed to the delivery of this new piece of transportation infrastructure for the City.

A process for selecting a formal name for the bridge will be advised later this year.