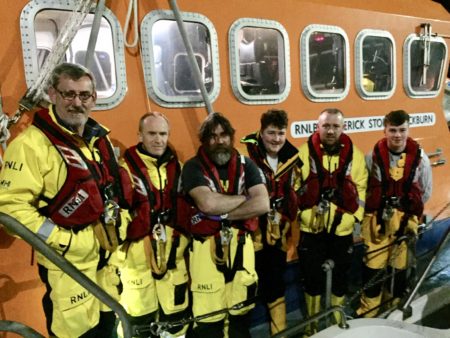 The Lifeboat Crew on Callout as they arrive back into Courtmacsherry at 4 am this morning. Sean, Denis, Ken, Evin, Tadgh and Conor. 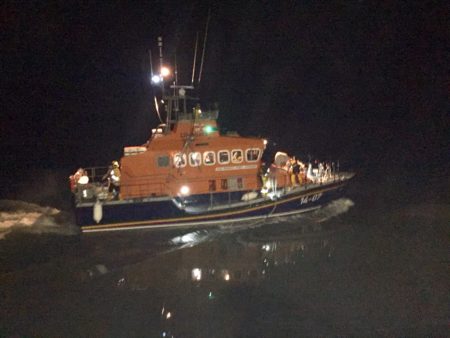 The Lifeboat in action this morning

The Courtmacsherry All-Weather RNLI Lifeboat was called out at 7.40 pm last night (Saturday) to go to the aid of a 40 ft Yacht which sought assistance 34 Miles off Courtmacsherry and due south of the Seven Heads peninsula in West Cork. Under Coxswain Sean O Farrell and a crew of five, the Lifeboat was quickly away on the Bank Holiday Saturday and immediately made its way at full speed to the area of the casualty. The casualty had four persons on board and was on route to Spain from Ireland when they lost Engine power two days ago. Yesterday evening they were losing all Battery Power as well and sought assistance from The Coastguard. The Lifeboat reached the causality at 9.30 pm and immediately took the Boat in tow. After a slow tow in good conditions, the Lifeboat and the Casualty arrived at the safe surrounds of the Castle Park Marina in Kinsale at 2.45 am this morning. The crew of the yacht were well pleased to be on safe soil early this morning, as they were drifting helplessly over the past few days in calm winds. The Lifeboat Station Voluntary LPO Vincent O Donovan praised the 16 Voluntary crewmembers who responded within minutes last night to help those in trouble on the sea and all were prepared to sacrifice the many other activities’s on a busy Easter Weekend in the Village of Courtmacsherry.

Having been at sea for over eight hours, The Trent Class Lifeboat “Frederick Story Cockburn” has now returned to its moorings in Courtmacsherry just after 4am, after refuelling and getting into readiness of whenever its next callout may occur.