By TheCork.ie on 19th May, 2019Comments Off on Cork software company ‘Poppulo’ creates 125 jobs

The employee communications software company Poppulo is to create 125 jobs in Ireland to support its international expansion.

The jobs in the Cork-based company will be mainly high-tech engineering and R&D roles and there will also be sales and marketing positions. The expansion is supported by the Department of Business, Enterprise, and Innovation, through Enterprise Ireland. 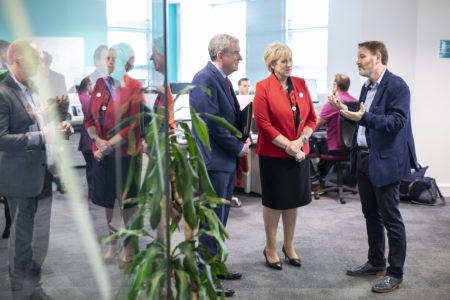 A parallel expansion in the United States will bring Poppulo’s total workforce to over 400 within three years. It currently employs 200 people – 163 in Cork and 37 in Boston. Previous jobs announcements have all been delivered on ahead of target.

Founded by Irish tech entrepreneur Andrew O’Shaughnessy, Poppulo’s software is helping to transform workplace communications and engagement in more than 100 countries. Over 30% of the largest employers in Europe and 20% of the largest employers in the United States are Poppulo customers. Customers include Unilever, Bank of America, Nestlé, Johnson Controls, Rolls-Royce – and almost half the world’s top pharma companies.

Announcing the new jobs, O’Shaughnessy said that while Poppulo is rapidly growing its global customer portfolio and expanding its base in the US, he was delighted to be in a position to create high-value jobs in Ireland.

He paid tribute to Enterprise Ireland for its encouragement and support over several years. “Enterprise Ireland has been with us from the start when we were a handful of people and they’re just as committed to our success as we scale. Supporting home-grown successful indigenous companies so that they can scale is incredibly important,” he said.

Minister for Business, Enterprise, and Innovation Heather Humphreys TD said: “This is a great day for Poppulo, Cork and Ireland. Earlier this year, I launched the new Government strategy, Future Jobs Ireland, which aims, among other things, to ensure that we are creating the conditions for quality and sustainable jobs that are fit for the future. ‘Innovation and Technology’ and ‘Skills and Talent’ are just two of the key pillars in this initiative, and I am pleased to say that Poppulo is a shining example of a company that is leading the way on both fronts. As an Irish multi-national, Poppulo is rooted in innovation and progression. The company’s continuous investment in Cork shows its commitment to the local area and its talented workforce.”

Speaking at the jobs announcement, Enterprise Ireland’s Executive Director Kevin Sherry said: “Enterprise Ireland has worked closely with Poppulo, both in Ireland and internationally, since its establishment. It is a great example of an Irish company, headquartered here in Cork with a clear global ambition that is building its scale and expanding its reach internationally and growing its base of new high-quality jobs in Ireland. Through its commitment and investment in innovation Poppulo has successfully positioned itself to be a global leader in Internal communications software.

Enterprise Ireland is pleased to support this next exciting phase of expansion which will result in 125 new jobs in Cork and we look forward to continuing to work with Andrew and the team at Poppulo to fully realise their global ambition.”

Earlier this year, the US private equity firm Susquehanna Growth Equity (SGE) invested €30 million for a minority stake in Poppulo, which O’Shaughnessy said would help the company accelerate its international expansion plans in a sector that is now recognised as critical to business success.

“The companies and organisations who are winning know how absolutely critical internal communication is not only for employee engagement but also in terms of recruitment and retention – and ultimately the bottom line,” said O’Shaughnessy at the time.