The legacy of the O’Neill family is a story that is going to continue to run. Jonjo Sr came from humble beginnings in County Cork, but his son has taken the family name to a new stratosphere in recent years. The combination of the father as trainer and son as jockey is as heart-warming as it is successful, and long may it continue.

Jonjo Jr looks a sure bet to continue the successes that his father achieved, and the 2019-20 jumps season could prove a decisive moment in his life; with chances in all the feature races across the horse racing schedule. If you would ask him, the opportunity to replicate his father’s feats at Cheltenham would the one that would stand out above the rest.

Dawn Run
Jonjo Sr was already an established jockey by the time that he entered the 1984 Cheltenham festival, but over the space of the next two years his career would be taken to another orbit because of one horse; Dawn Run. The 1984 festival was the coming-out party for the mare as she won the Champion Hurdle at the featured jump festival, but two years later she would achieve greater success in the form of the Gold Cup. 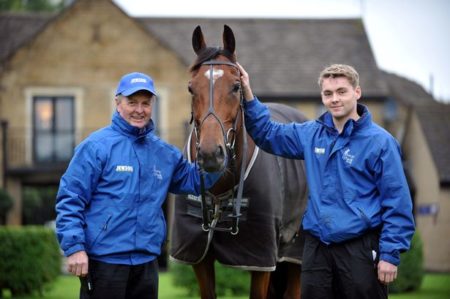 Don’t Push It
The Grand National was the one race that O’Neill could never complete; having failed to complete the course on seven attempts. Following his retirement, he seamlessly adjusted to life as a trainer and after Wichita Lineman’s success in the William Hill Trophy in 2009, O’Neill had a great chance in the Grand National.

Don’t Push It was ridden by Champion Jockey A P McCoy; who had famously never tasted victory in the Grand National, with the closest he had come being third on three occasions. The 14-year McCoy hoodoo was about to end, and it was to be an outstanding success for O’Neill. In the end, it was fairly routine, as the then 11-year-old finished five lengths ahead of Black Apalachi after being set off at the joint-favourite at 10/1. Further training success has followed for O’Neill with Synchronised victory in the 2012 Gold Cup a standout, but it’s likely that his Grand National success with McCoy will never be beaten.

Jr Success
Following on from your father’s success at the Cheltenham would never have been an easy assignment, but that has been something that Jonjo Jr has flourished with. To date, he has clocked up 49 wins in 328 races; with the majority of those coming during the 2018-19 season. The most notable of which came at the venue where his father made his name.

Early Doors was his ride in the final race of the 2019 Cheltenham Festival, and it was to be a genuinely momentous day. He successful rode with class around the circuit to become victorious in the Martin Pipe Conditional Jockeys Handicap Chase by one-and-a-quarter-lengths.

Of course, there is still some way to go to match his father’s achievements; but next season could be the one where the rising star of the weight room finally reaches the pinnacle and when somebody speaks about Jonjo O’Neill; it will be the 20-year-old that they think about. Maybe if Jonjo Jr. has a son or daughter and they follow the footsteps of their relatives, we can have a complete O’Neill trifecta legacy, like a trilogy passing through generations and making history into horse racing!