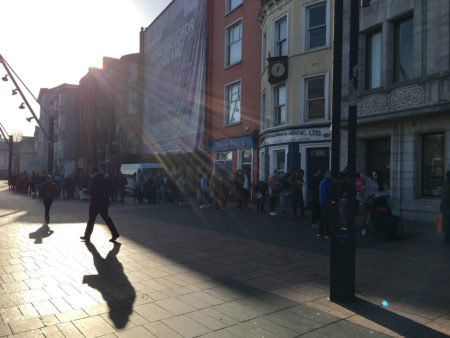 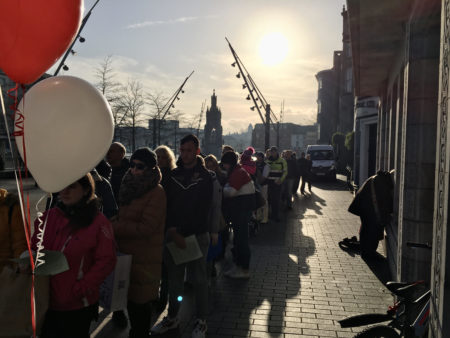 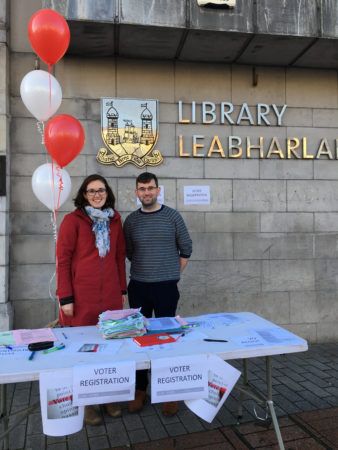 Picture an open air table on Grand Parade in Cork City centre. In those cold conditions on Saturday morning, a large number of people queued for up to 40 minutes to register to vote. The registration drive was organised by Cork Votes, a newly formed group established in response to the very low turnout in the Cork North Central By-Election. The aim of Cork Votes is to increase voter turnout and participation.

Pádraig Rice, co-organiser of Cork Votes said: ‘We were blown away by the number of people who turned up to register. As we were setting up, a queue started to form. We registered over 200 people in just two hours and provided forms and information to at least 100 more. This is an unprecedented voter registration event in the context of a general election. It reinforced our belief that if you make it easy and accessible people will turn up and they will engage. We removed all the possible barriers by providing the forms and had a Garda on hand so that form could be completed there and then. Most importantly it was at a time and place that suited people. A number of people who turned up today had poor literacy skills and we were able to assist them with the form – I think that made a huge difference for people. This is how voter registration should be done by the local councils or preferably a well-resourced independent electoral commission. Since the election has been called we have received lots of queries on social media about registering to vote – in particular from 17 and 18 year olds. It seems that some people aren’t receiving adequate political education in school. Nor are schools assisting students with voter registration.’

Pádraig Rice also said: ‘The right to vote was hard-won. We have to care for it, nurture it, encourage people to take part and make it easy. Democracy is under strain in many Western countries. Ireland isn’t immune to that. There was a lot of discussion in recent weeks about the Black and Tans and the RIC – it’s clear people care deeply about the formation of the state but we also have to care for the Republic in the here and now. Voter turnout matters because every vote counts. We saw that in West Cork in May’s Local Elections when Cllr Holly Cairns won by just one vote! We are also reminding people that the decisions made by our politicians affect every aspect of our lives from how much tax we pay, to how many social houses are built or what kind of healthcare system we have.’

Aisling Ryan, co-organiser with Cork Votes said: ‘We never expected so many people to turn up to register. It demonstrates the need to make voter registration more accessible and straightforward. People had travelled from towns well outside the city including Macroom and Mallow to register on Grand Parade. The two main reasons people cited for coming to register at the event were confusion over what form they needed to fill in and the difficulties associated with getting to a Garda station to get forms signed because many Garda stations now have reduced opening hours. We were happy to assist a number of people who wanted to register to vote but had difficulties filling in the form. There was also a high demand for Change of Address forms with many people saying they are moving house quite regularly due to the rental market.’

Aisling Ryan also said: ‘I really enjoyed meeting people in the queue and hearing why many were coming to register to vote for the first time. In typical Cork style there was plenty of chat in the queue despite the cold weather and wait time – at one point the queue ran from the Cork City Library all the way down to the Nano Nagle Bridge.’

‘Once the registration deadline for the Supplemental Register of Electors has passed on 22 January we will focus on sharing information and tips about the practicalities of voting in an attempt to limit the number of spoilt votes cast on 8 February.’

‘At Cork Votes we want to get as many people out to vote. Our core message is: your vote matters, your vote counts, get on the register by next Wednesday and get out to vote on Saturday the 8th of February.’