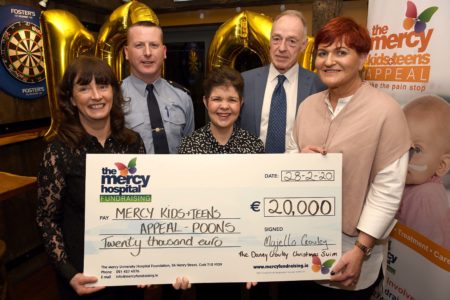 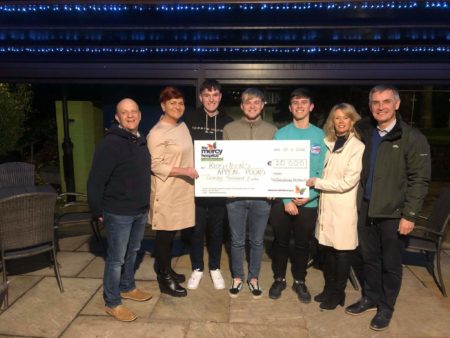 On Christmas Day 2019, over 400 people from across Cork descended on Myrtleville Beach to brave the chilly waters for the 7th annual Danny Crowley Memorial Swim, raising a fantastic €20,000 in aid of the Mercy Hospital Kids + Teens Appeal. This year’s swim was extra special as it hit the €100,000 mark in funds raised for charity since the swim began in 2013.

The funds raised since 2013 have made a huge difference and will continue to do so at the Mercy Hospital Children’s Leukaemia unit where Danny spent a significant amount of time when having treatment in 2013. The unit also provides a Paediatric Oncology Outreach Service (POONS) which enables children to receive treatment from the comfort of their own home.

Danny’s mom Majella Crowley is extremely proud of how far the swim has come since 2013. Commenting at the cheque presentation, Majella said, “We are delighted the swim has raised over €100,000 for the Mercy University Hospital Children’s Leukaemia Unit. Dr Clodagh Ryan and her team at the Mercy were so good to Danny while having treatment in 2013. Since the first swim in 2013, the response has been amazing. It started with about 40 swimmers, now it’s grown to 400! The swim is a super reflection of the great work communities can do. We are blown away by the generosity and support this swim generates and we would like to thank all those involved in any way.”

Majella Continued, “The Christmas Swim is a lovely way to remember Danny and for so many people now, Christmas wouldn’t be the same without Danny’s memorial Christmas Day Swim. It keeps Danny’s memory alive and for us that is immeasurable, while at the same time raising funds for a great cause and creating an event that is special at Christmas time. To all involved, the whole community has been wonderful, they really have helped to create something special. We really appreciate this support and want to thank each, and every person involved.”

Deirdre Finn, Campaigns Manager at the Mercy University Hospital Foundation thanked Majella and everyone involved in the Danny Crowley Memorial Swim for their continued support, “I would like to thank every single supporter of the Danny Crowley Memorial Swim as they have made such an important contribution in enabling the Mercy University Hospital to provide the best possible care and treatment for some of our youngest patients and their families during a very difficult time.”

An Garda Síochána have also given great support and recognition to the Danny Crowley Christmas swim. Commenting at the cheque presentation, Garda Damien Craven said, “An Garda Síochána are very happy to contribute in some small way to helping an event, which has obviously touched so many and creates a massive Community Spirit at a time of year which is often quite difficult for people.

Damien continued “It was fitting also that 2019 was the year when the 11 young people (Amy, Alannah, Michael, Eanna, Dan, Eoghan, Brian, Shane, Paul, Scott & Jack) who started the Danny Crowley Swim, were recognised as positive role models within their community with the group winning a coveted Cork City Garda Youth Award for their endeavours and contribution to helping others. This is a fantastic achievement. An Garda Síochána were extremely impressed and in awe of what this group of young people have achieved to date are pleased to announce that this is not the end of this chapter. Cork City Division of An Garda Síochána are delighted to put the Group forward for a National Youth award, the highest honour An Garda Síochána can bestow on young people and deservedly so. Fingers crossed the National Adjudication Panel will see what we all see and acknowledge this truly great group for its wonderful achievements.”