Landmark new fifteen storey building due for completion in 2021 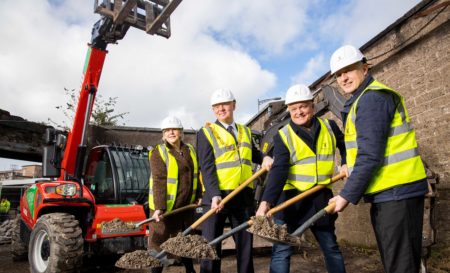 The Prism Building is Tower Holdings Group’s first development in Cork city, and is located on the city island at the edge of the expanding new docklands regeneration area.

Taking its inspiration from the famous Flatiron Building in NYC, The Prism Building which is designed by Cork based Reddy Architecture + Urbanism, will be a first of its kind in Ireland.

Positioned on a triangular shaped brownfield derelict site and with a footprint of only 310 square meters, the crystalline, light filled tower will stand at fifteen floors tall, offering grade A, own-floor office space with panoramic views over the city.

The building will be one of the first commercial office buildings in Ireland to comply with the new stringent NZEB energy efficiency regulations.

Kevin O’Sullivan, President and CEO of Tower Holdings, said; “we are delighted to have reached a point where we are now ready to commence this exciting project. It is the first one for us in Cork so that makes it very special. We have selected an excellent and highly experienced project team and the quality of materials will certainly make it a standout development in Ireland”.

Ann Doherty, chief executive of Cork City Council, said; “We are delighted to see work begin on what will be an iconic building for the city centre. Cork is going through a period of unprecedented economic development and investment with up to €1 billion of office, hotel and apartment developments underway in the city centre.

Cork City Council is focussed on working with its strategic partners to ensure the city grows as a world class investment capital. Cork is home to more than 169 FDI employers employing almost 39,000 people and eight of the world’s 10 leading pharmaceutical companies have a presence in the Cork metropolitan area”.

Tower Holdings Group will work closely with Cork City Council to minimise disruption to traffic during the construction phase.

The Prism Building is scheduled for completion in Q4, 2021.