Cork artists Natasha Bourke and Aoife Burke have been awarded prestigious Next Generation awards by the Arts Council, the government agency for funding and developing the arts. The award means both Natasha, involved in circus, and Aoife, a musician, will receive €20,000, in effect to buy time to develop their practice. Natasha and Aoife are just two of 23 artists from all over the country who have been selected for the award. 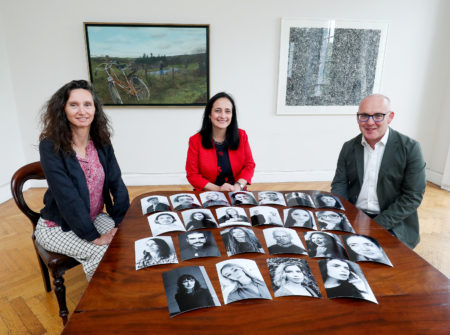 Artists will also take part in a collective week-long residential programme in The Tyrone Guthrie Centre at Annaghmakerrig, Co Monaghan, in early 2021. There, they will have the opportunity to engage with mentors and other supports to help shape their work into the future.

The Next Generation programme recognises and promotes a selection of artists from different disciplines, such as traditional arts, music, dance, film, theatre and literature.

“Being a Next Generation Artist is an absolute honor. I was thrilled to be selected at such a crucial point in establishing my career and after a lot of hard work. This opportunity will enable me to sustain & further my dedicated practice, to acquire specialised mentorship, broaden my network and develop new exciting work.”

“I feel privileged to be selected as a 2020-21 Next Generation Artist. This support affords me the time, freedom and scope to focus fully on my creative practice, and to explore fresh perspectives within my craft. This timely investment in my artistic potential comes with a sense of responsibility too, to affirm the Arts Council’s endorsement and act of faith in me. The bursary has imbued me with a renewed sense of purpose, especially in light of this uncertain period for the arts sector as a whole.”

Arts Council Director Maureen Kennelly said the agency had received a large number of applications for the award this year, and that the standard had been particularly high.

“All of the artists have demonstrated an exceptional ambition and vision for their work, and the Arts Council is delighted to support them,” she said. “I look forward to following them in their work over the coming years.”

A native of Cork, Aoife studied with Emma Ferrand at the Royal Northern College of Music and with Christoph Richter at the Folkwang Universität der Künste, graduating with a first-class BMus. (Hons.) and an LRSM Diploma in Performance with Distinction in 2014. During her studies, Aoife was awarded the Raphael Sommer Music Scholarship and partook in the Britten-Pears Young Artist Programme. She was subsequently awarded a first-class MA in Performance from the CIT Cork School of Music, where she studied under Christopher Marwood. Aoife performs regularly at venues and festivals in Ireland and further afield, including at the West Cork Chamber Music Festival, New Music Dublin, the NCH Chamber Music Gathering, the NCH Perspectives Series and the Clandeboye Festival, where she was awarded the Special Festival Prize. She has collaborated with The Vanbrugh, the ConTempo String Quartet and the Gavin Bryars, Kirkos, Ficino and Crash Ensembles. She currently holds a residency at the Triskel Arts Centre, where she curates the Spotlight Chamber Music Series. Upcoming engagements include a national tour with the Banbha String Quartet, supported by the National String Quartet Foundation.