The Minister for Public Expenditure and Reform Michael McGrath (A Carrigaline, Co Cork based TD who recently became a Minister) today launched the Smarttech247 Women in Cybersecurity Academy. The leading managed security service provider is offering an intensive course for women looking to develop skills for a future in cybertech and security. The first student intake is planned for this Autumn.

The course will cover the most up-to-date curriculum, directly related to the industry-leading efforts of Smarttech247 to tackle the evolving range of cyber attacks around the world. Following an end-of-term assessment, some of the top performers will be offered the opportunity to take up a 12-month placement with Smarttech247 at one of their bases in Ireland, Poland or Romania.

General Manager of Smarttech247, Raluca Saceanu says the Academy was partly inspired by her experience as a woman working in the sector:

“Men outnumber women three to one in the cybersecurity sector which means that the industry has a wide pool of untapped talent as we face an increasingly sophisticated level of threat from our adversaries. With this programme we want to demonstrate to young women who are at the start of their cybersecurity career that many opportunities await them.”

Minister Michael McGrath congratulated the firm on the initiative:

“It’s great to see Raluca and her team at Smarttech247 being proactive in tackling this problem. It’s a positive example of a company playing their part in establishing a more gender-balanced working environment, which can only be of benefit to all. I wish them and the Academy’s students all the very best on their journey.” 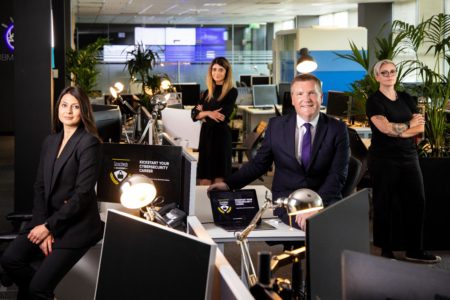 Over a 6-week term, students of the Smarttech247 Women in Cybersecurity Academy will have:

Applications are now being accepted for the course, from women who have, or are on track to receive, a degree in computer science. Women who are already working as threat hunters or pentesters who want to further develop their skills are just as welcome as those who are recent graduates in the field. Because students will be given assignments and projects to complete in their own time, the Academy is open to as wide a pool of talent as possible – from a student in final year to a parent or carer at home who’s considering a return to the workforce, or someone working in the sector who’s looking for a new challenge.

Raluca says a major skills gap has evolved in cybersecurity as it undergoes rapid growth, with 4 million vacancies being predicted for the industry by 2021, and women should be filling more of those roles:

“Cybersecurity needs more diversity in thought and action to help drive innovation, improvement and resilience, especially now as the coronavirus pandemic raises significant risks in unprecedented ways. We look forward to seeing graduates of the Smarttech247 Women in Cybersecurity Academy playing their part in the fight against cybercrime activity.”