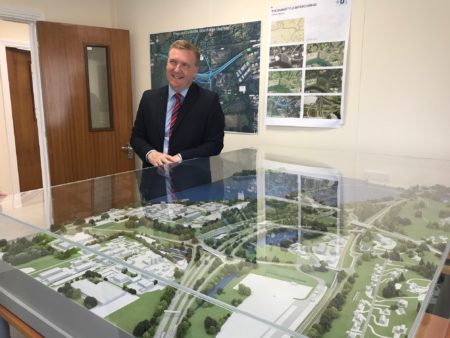 A new dumbbell interchange will be provided to the east of the main interchange for Little Island. Improvements will also be made to the Silversprings junction on the N8 into the City

Up to 110,000 vehicles use this interchange every day making it one of the busiest in the country. This volume of traffic means that it operates beyond capacity during peak times and this can result in significant delays on the approach roads and the Jack Lynch tunnel.

The proposed project involves upgrading the existing interchange and building a new dumbbell interchange to the east of the existing tunnel to provide an integrated interchange linking the Jack Lynch tunnel, the N25 and the M8 through mostly free-flow movements, where traffic movements are not conflicted by opposing traffic (via yielding or traffic lights) as they are currently.

Commenting on the progress to date, Minister McGrath said:

“On completion, the Dunkettle interchange scheme will have a hugely positive impact on traffic flow at this critical artery. The capacity of the junction will be greatly improved, reducing congestion and cutting journey times to and from the city. This will be a great boost to the economy of the region.

“I am informed that the procurement procedure for the awarding of the main construction contract is at a very advanced stage and it is anticipated the contract will be awarded shortly with work to commence very soon after. Advance works have been ongoing on site for some time including the development of a new east- west cycleway.”