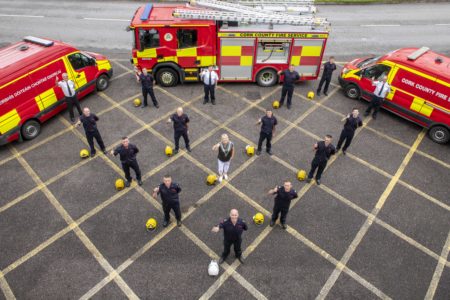 Cork County Council’s Fire Service recently took delivery of two new Class B Fire Appliances stationed in Midleton and Bantry Fire Stations. The new frontline appliances have been funded by the National Directorate for Fire and Emergency Management in the Department of Housing, Heritage and Local Government.

Mayor of the County of Cork, Cllr Mary Linehan Foley welcomed the news;

“Brigades in Bantry, Midleton and across the county have responded to a number of incidents arising from severe weather events during Storm Ellen and Storm Francis. The Bantry Brigade played an integral part of the response to the recent flooding in Bantry town centre. Midleton Fire Brigade recently responded to a serious fire in the Post Office building on Main Street, Midleton and a fuel tanker fire on the N25. Our Fire Service is invaluable, crews are at the frontline daily and this additional equipment will facilitate their work and increase safety and efficiency.”

“Midleton Fire Station responds to between 250-300 emergency calls each year, serving a population of 40,000. It is responsible for much of Cork County’s strategic industrial areas with the pharmaceutical industry in Carrigtwohill, oil refinery and power stations at Aghada/Whitegate and distilleries in Midleton and Dungourney. Bantry Fire Brigade serves a population of almost 11,000, including the inner part of Bantry Bay which contains the Whiddy Island oil terminal and a large rural area on the Sheep’s Head and Beara Peninsulas. The remit of both stations is extensive. This new appliance contains the latest technology, with a telescopic mast light which will greatly aid the fire crews when responding to after dark incidents.” 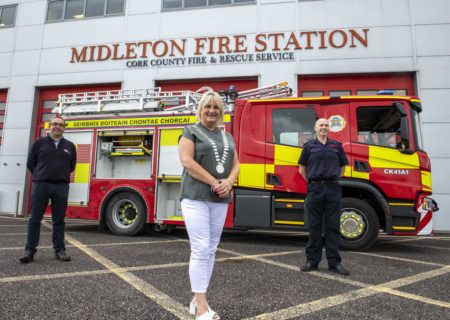 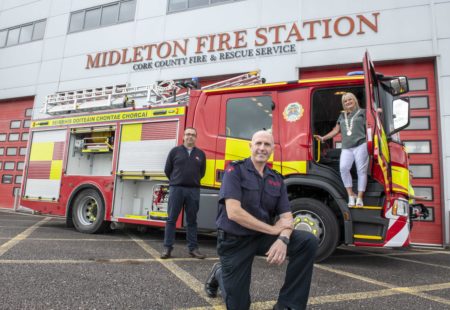