A new 1920 centenary exhibition, which tells the story of Cork’s two patriot Lord Mayors, opened to the public this morning at the museum in Fitzgeralds Park.

“Suffering the Most – The Life and Times of Tomás Mac Curtain (whose name is written with a space between the Mac and Curtain) and Terence MacSwiney”, is set against the backdrop of the local and national events of the War of Independence.

The Cork Public Museum exhibition uses images, personal possessions and information panels to tell the story of these two historic figures and the times they lived in.

Due to Covid-19 public health guidelines, six people are allowed in the gallery at one time and visitors are asked to limit their time at the exhibit to 35 minutes.

Lord Mayor of Cork Cllr. Joe Kavanagh said: “It was an honour to have the Taoiseach restart Cork’s 1920 commemorations by officially opening this exhibition earlier this month. It is also heartening to see it open to the public. I strongly recommend a trip to the park as while we may be living through challenging times, the importance of 1920 to Cork’s modern history can’t be overestimated”. 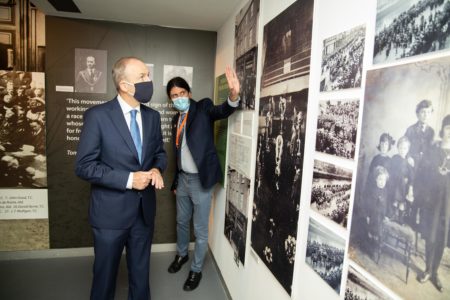 An Taoiseach Mícheál Martin with Dan Breen, Curator at Cork Public Museum viewing the 1920 commemorative exhibition “Suffering The Most – The Life and Times of Tomás Mac Curtain and Terence MacSwiney” at the Cork Public Museum.
Picture Darragh Kane

“You can only imagine what it was like to live through the tragic death of two Lord Mayors, the Burning of Cork, the hunger strikes at Cork Prison and the resulting tension and violence that hung in the air,” he said.

A second exhibition “Cork 1920 – The Burning of a City” is also a part of Cork City Council’s Decade of Centenaries programme.

Located at St Peters on North Main Street, this focuses on the events of December 11th and 12th 1920, when Cork City was burned by Crown Forces.

The Burning of Cork inflicting huge physical and economic damage to the heart of Cork City, with over 40 business premises and 300 homes destroyed.

The exhibition also features the stunning portrait of the grieving Muriel MacSwiney, widow of Lord Mayor of Cork Terence MacSwiney, by local artist Jeanette Collins. The portrait was funded by the Cork City Council Commemorations Fund.

EAST CORK: Two new pedestrian crossings being built on Main Street, Midleton
Previous Post
Over 70s are having trouble applying for medical cards, because their incomes are too high
Next Post
Tweets by @TheCork_ie