A real life Elf of the Shelf will be seen at Cork’s Metropole Hotel throughout December this year. Guests have been told to be on the look-out for the hotel’s elf – with the James Bond eque name of ‘Peppermint Tinselbottom’ as she aims to spread cheer this festive season. 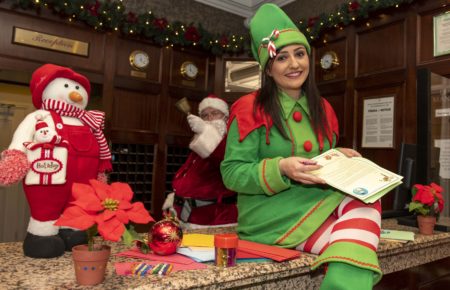 A real life Elf of the Shelf will be seen at Cork’s Metropole Hotel throughout December this year. Guests have been told to be on the look-out for the hotel’s elf – Peppermint Tinselbottom as she aims to spread cheer this festive season.
Pic: Brian Lougheed 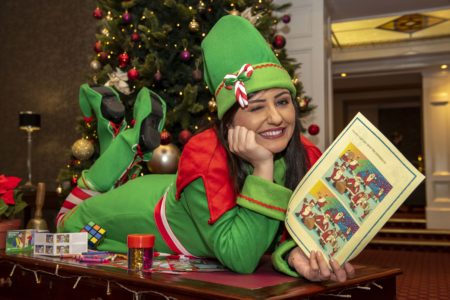 The elf will be making appearances throughout December at the Metropole. She could be anywhere from chatting to John, the hotel’s famous concierge or enjoying a coffee at the outdoor Met Cafe. She might even be indulging in some bottomless brunch or afternoon tea.

Also, in order to raise funds for their charity partner, Cork Penny Dinners, the front office team at The Metropole are now taking orders for children’s letters from Santa’s Little Helper. The letters are €6.50 each and for each letter sold €5 of the payment will go directly to Cork Penny Dinners.

“We are so looking forward to seeing guests come through our doors once again in December and to add some extra magic this Christmas we have decided to raise money for Cork Penny Dinners. We are hoping the people of Cork will help us support this fantastic charity and we would greatly appreciate your help.”

The Metropole’s Elf on the Shelf will be popping up throughout the hotel in December and may even make some special appearances in the hotel lobby.

Trigon Hotels, which includes the Metropole Hotel, Cork International Hotel and the Cork Airport Hotel have just launched their Gift Card, a first for the hotel and in perfect time for the festive season ahead. They are encouraging people to ‘shop local’, saying it has never been more important. With Trigon, as well as supporting local employment people are also supporting Trigon’s local suppliers including their food suppliers, beverage suppliers, printers and so much more.

The Metropole Hotel in Corks Victorian Quarter is hopeful of a busy and bustling Christmas in Corks City Centre. They are currently putting the finishing touches to their festive afternoon tea which is available for delivery, takeaway or dine in. Equally so, the “Bottomless Brunch” will be in full swing at the weekends in December and there is also a takeaway brunch option. The Metropole are currently operating “The Met Café” which is an external takeaway café outside the hotel which is currently delighting customers with Nutella crepes, boozy Bailey’s hot chocolate, festive mulled wine and sweet treats. The Metropole are looking forward to opening their brand new Gift Card store adjacent to the hotel on McCurtain Street.