Religious Brother is ‘Cork Person of the Month’ @Cork_POTY

To mark his contribution to education and to celebrate the 40th anniversary of his Youth Club, Br. Ben (pictured above at the Youth Club) receives a Cork Person of the Month award. His name also goes forward, together with the other Persons of Month picked this year, for possible selection as Cork Person of the Year at a Gala Awards Lunch at year’s end. The Cork Person of the Month award scheme partners are the Irish Examiner/The Echo; RTÉ; Southern; Lexus Cork; AM O’Sullivan PR; Cork Crystal; Tony O’Connell Photography; CAVS; Cork City Council; Cork County Council; Manus O’Callaghan. Pic by Mick Finn.. 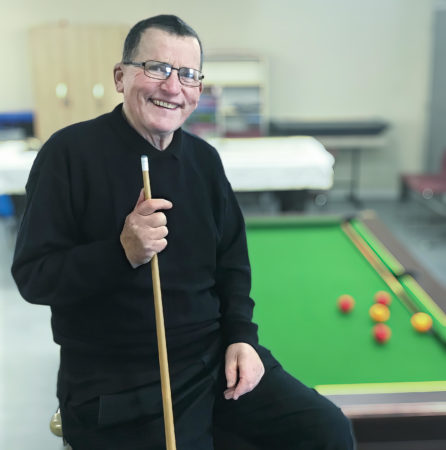 Br. Ben Cusack’s contribution to education and youth mentoring over the past 40 years in Cork has been recognised with a Cork Person of the Month award.

Br. Ben was the very popular principal of Sullivan’s Quay CBS between 1981 and 2006. He also founded their famous Edmund Rice Youth Club, better known as the “Bro’s Club” after Br. Ben. Thanks to a great team of volunteer helpers the Youth Club is still going strong and celebrates its 40th anniversary this year.

He realised that there was a need to respond to the needs of young people, not just in school but in out of school hours as well. Many generations, in some cases of the same families, have grown up with and attended the Bro’s Youth Club, including members of bands like Sultans of Ping and Frank & Walters.

Br. Ben Cusack’s contribution as an educator and a mentor has been immense. A very modest man, he always gives credit to other volunteers from the community for their work at the Youth Club. Now retired, he continues to volunteer at the Club and to other school communities such as Coláiste Eamann Rís, Deerpark CBS, Greenmount N.S., and St. Joseph’s NS Mardyke.

In 1994, Br. Ben received an honorary Masters degree from University College Cork (UCC) to mark his contribution to young people and to education. He was also the recipient of a Lord Mayor’s Award from Cork City Council, which he received in 2005. Originally from Waterford, he is an avid sports fan, especially of Waterford hurling. He is also involved with St. Finbarr’s Hurling & Football Club, Cork.

“Br. Ben Cusack has many friends and huge support in the educational and sporting community here in Cork, particularly among past students and parents of Sullivan’s Quay CBS and all those associated with his famous Youth Club,” said awards organiser Manus O’Callaghan.

His name now goes forward, with the other Persons of the Month chosen this year, for possible selection as Cork Person of the Year, at a Gala Awards Lunch to be held at Rochestown Park Hotel at year’s end. This is the 28th year of this awards scheme. Partners include Southern; AM O’Sullivan PR; Lexus Cork; Tony O’Connell Photography; Cork Crystal; CAVS; Cork City Council; Cork County Council; and awards founder Mallow man Manus O’Callaghan.