A new temporary system that is helping to significantly clear the citizenship backlog has been in place since 18 January 2021. The temporary system enables applicants to complete their naturalisation process by signing a statutory declaration of loyalty, and have a Commissioner for Oaths witness this. This signed statutory declaration replaces the requirement for citizenship applicants to attend citizenship ceremonies, which have been temporarily suspended during Covid-19.

In-person ceremonies have been provisionally scheduled to resume in December 2021, subject to the safety of all involved being assured. 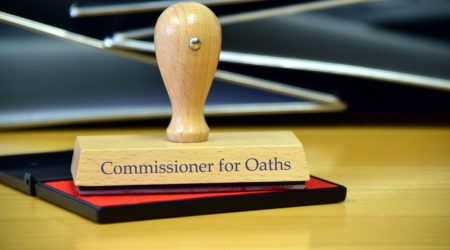 If you are in Cork, and have been granted citizenship, then contact www.CommissionerForOaths.ie to have your statutory declaration signed.

“Around 1,200 people have received their Irish citizenship in the 10 weeks since I opened the temporary statutory declaration process. I understand that this includes a significant number of frontline workers who have made such vital contributions during the pandemic. This is fantastic news for the people involved and demonstrates clearly that the process is working.”

“Impressively, this has been delivered during the highest level of Covid restrictions, reflecting our commitment to ensuring eligible people receive their Irish citizenship as soon as possible.”

“A further 1,159 people have returned their signed statutory declarations and we will be sending them their certificates of naturalisation in the coming weeks.”

Following the successful implementation of the initial stages of the project, the Minister has also announced its expansion:

“We achieved our target of communicating with 4,000 people by the end of March and are now extending the statutory declaration process to a further 2,500 people. By the end of June, 6,500 people will have been given the opportunity to complete their Irish citizenship.”

The statutory declaration process replaces the requirement for citizenship applicants to attend citizenship ceremonies, which have been temporarily suspended during Covid-19. In offering her congratulations to Ireland’s newest citizens, the Minister announced that plans are well advanced for a virtual celebration later this month, which will give Ireland’s newest citizens an opportunity to properly celebrate in the company of other new citizens,

“Becoming a citizen of the country you have chosen as your home is a special moment. I know that many people have been disappointed that the in-person ceremonies cannot take place at this time. But that doesn’t mean that we can’t celebrate together.”

If you are in Cork, and have been granted citizenship, try contacting www.CommissionerForOaths.ie to have your statutory declaration signed.

SOCCER: Cork City FC eeased to 10/1 from 6/1 to bounce back as Champions
Previous Post
Best casinos to visit in Ireland