The Significance of Skull Jewelry in a Nutshell

What kind of emotions or thoughts occur in you when you see skull jewelry? Fear and disgust? Or maybe curiosity? A skull is a complex symbol with myriads of meanings, and the thoughts and feelings it provokes are on the opposite ends of the spectrum. This post is for everyone wishing to know what skulls really mean.

Overall, the skull signifies the end of earthly existence. Oftentimes, skull images are picked by people who regularly face the risk of death – bikers, military and police people, etc. While the skull represents death, it doesn’t necessarily summon it. On the contrary, this symbol is protection against the Grim Reaper. For instance, bikers believe that a skull ring or tattoo is a talisman that keeps death away. You’ll be alright as long as you keep the mark of death, which is the skull.

The meanings of death and life and closely intertwined in this symbol. When our ancestors learned that skulls don’t deteriorate, they started seeing something magical and sacred in them. They connected skulls with otherworldly forces and the world of the dead. If you were lucky to have a skull of a mighty or respected person, it would grant your wishes for great health and long life. At least, this is what bygone generations believed in.

For indigenous Indians, for example, the skull symbolized the enjoyment of the moment while you were still alive. It was a triumph of life over death as well as a representation of rebirth, renewal, and eternal life. Native Americans still believe that death is not an end, it is a transition to another world where souls live. Even today they celebrate life and death as a single whole. The world-famous Day of the Death pays honor to deceased loved ones and encourages us to enjoy this very moment. The main symbol of this day is a sugar skull. It is said that it helps communicate with the ones who live in a better place.

As a rule, the meaning of the skull remains the same for men and women alike. The only thing that is different is style and visual representation. Men gravitate to more intimidating and realistic images such as skulls and daggers or flames. By picking these images, the sterner sex tries to convey the meaning of power, confidence, and danger.

Women, in contrast, have a penchant for stylized and fancy imagery such as a skull drowning in a bouquet of roses. The message they send is the cyclicality of life and balance in everything whether it is good or evil, beauty or ugliness. 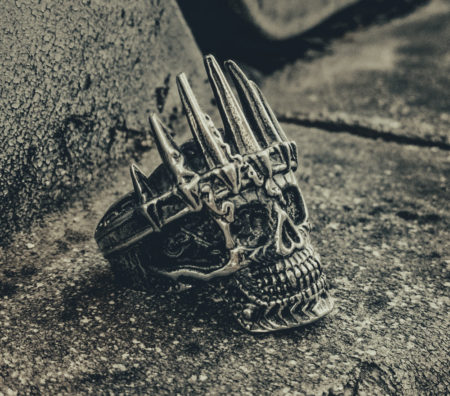 Now let’s take a look at some other symbols that frequently accompany the skull.

Such a duo demonstrates the imperiousness of a person, his or her desire to achieve their goal at any cost. A sugar skull with a flower crown has a different meaning. It shows that a person is looking for happiness in the afterlife.

The skull (or bones) paired with a clock refer to the transience of life. A ring or pendant carrying this symbolism acts as a reminder that life is short. Therefore, we must invest our time in things that really matter.

Jewelry that emblazons these two images is a powerful love symbol. While the skull represents death, roses stand for love. Together, they imply a strong union of two people, and even death is unable to do them part.

The pair of these symbols can have different meanings, too. For instance, if flowers grow through the bones, this imagery showcases the triumph of life over death.

Apart from roses, skulls may be seen alongside other flowers. For instance, your skull jewelry may feature lilies. These flowers are considered to be a symbol of innocence, honor, and glory. Together, both symbols tell you to live your life with dignity. The skull adjoining a blossom stands for renewal and spring of life.

A skull is an ancient symbol so is a snake. While both of these images on their own signify death, together they represent wisdom and knowledge. Alchemists in the Middle Ages utilized the symbol of a snake crawling through the skull’s eye socket for their treatises. With jewelry featuring these images, you may emphasize that even death can’t defeat your wisdom. Another meaning you are able to convey is your achievements that won’t be forgotten after you leave the mortal world.

The skull engulfed in flames represents disastrous truth, sacrifice, or destruction. After all, all living things perish in the fire. In the biker community, flames are associated with speed and freedom. When combined with the skull, they may signify that a person isn’t scared of the speed and death it brings.

Skulls and other images accompanying it have many more meanings. If you’re not sure what somebody’s skull ring or pendant represents, it’s best to ask this person directly. The answer may surprise you.